Artist, Leo Tanguma is famous for his controversial murals at Denver’s International Airport. Learn about his difficult childhood and how he became one of the most well-known U.S. artists specializing in Mexican mural art.

Muralist, Leo Tanguma plans to add a blast of color to Federal Boulevard in the coming months with a large mural he is painting for North Presbyterian Church.

While he works complete the mural in the basement of the church at West 35th Avenue and Federal Boulevard, he will also be providing weekly classes to area youth, teaching them the tradition of Mexican mural art. 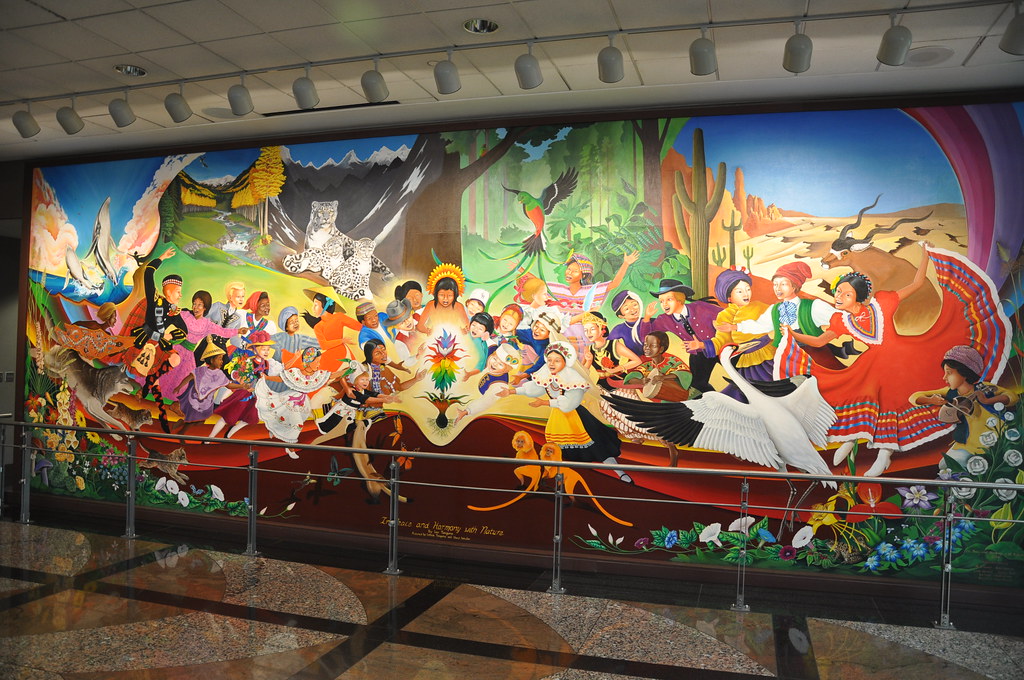 Millions have seen Tanguma’s work at Denver International Airport. His huge multi-paneled mural, ‘In Peace and Harmony with Nature’ has hung at the airport since 1995.

Tanguma was also hired in 1989 to paint a mural, “The Torch of Quetzalcoatl” in public at the Denver Art Museum. An estimated 89,000 came to see the mural during the four months it was at the museum. In May of 2000, he completed a massive project with his students at UNC’s Candelaria Hall. The 25 foot tall, 1400 square-foot work took three years to complete.

“Mexican mural painting is one of the great arts since the Renaissance,” he says of the 3,200 year-old art form.

“There is nothing like it in the world. I’ve taught at UNC and lectured in many places around the states, and nobody teaches mural painting. That’s kind of strange.”

With its colorful depictions of greed, drug and pornography used to represent base, earthly behaviors the mural he is now working on is sure to raise a few eyebrows when it is in full view of Federal Boulevard.

Viewed in its entirety the mural is ultimately meant to have a positive meaning, but Tanguma has encountered negative feedback about his work before. A former principal of North High School threw away a mural Tanguma painted with students for the school.

“He thought there was something was subversive about it,” says Tanguma. The mural called, ‘Passage of Values’ depicted both negative and positive behaviors.

“I don’t think I should be shy about saying what I think is negative so that young people will consider what I’m saying and what I’m portraying,” says Tanguma.

“In all the murals that have been called ‘radical’ the communities have accepted them really well.”

Tanguma’s latest work depicts not only bad behavior but a brown-skinned Jesus with depictions of North Presbyterian Church members below, ascending to the skies.

“It’s not evangelical, but it’s art with a mission, art with a purpose — to awaken consciousness and let us see the blessings that we have, but also the problems that we need to overcome. This is art as ministry. Even my murals at the airport have been called ‘painted sermons,'” he says. 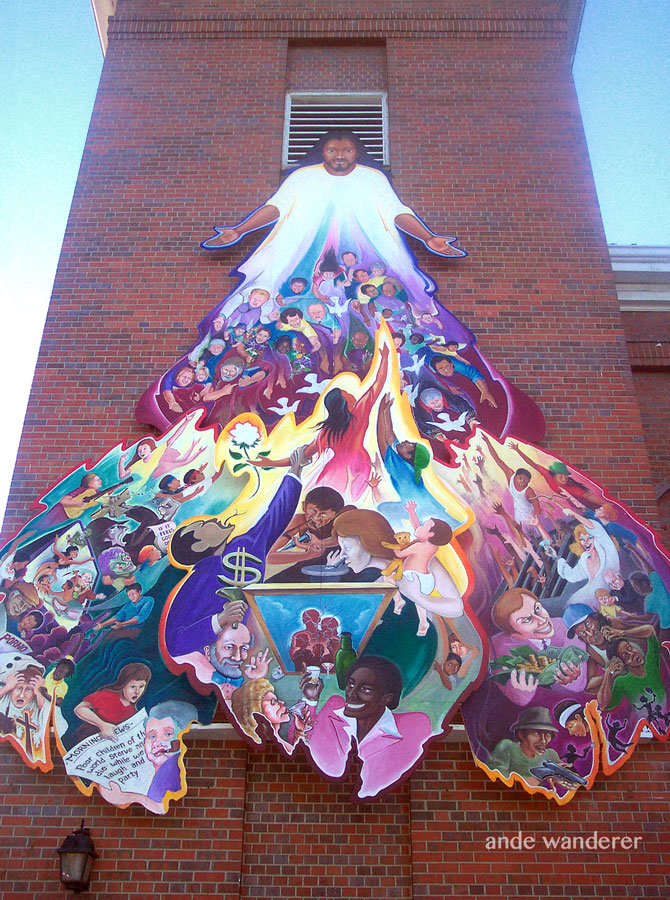 The 61 year-old artist describes himself as plain, but his life has been anything but ordinary.

He grew up in a family of farm workers and picked cotton, onions and corn in the fields of south Texas from the time he was able to walk.

“Every family had their little kids out there — there was no place to leave them. Maybe you could find some shade under a truck, but usually I’d be walking along with my mother and father all day long.”

An older sister who now lives in Denver with Tanguma, took a leading role in trying to create a better life.

“She would make sure I would take some books to read or paper to draw,” when they went out in the fields, says Tanguma.

When he was nine years old, his sister presented him with a set of oil paints. As an adult Tanguma realized she must have saved up for months to buy the gift.

“Young people took a lot of responsibility in those days, especially when you see your parents kind of surrendered a little bit and accepting life the way it was. There were young people like my sister who did not accept life that way and wanted to do better.”

Tanguma dropped out of the school in sixth grade because the transient lifestyle of a migrant farm worker made keeping a school schedule difficult. At age 14, he went to live with his influential older sister in Houston.

“I got a job as a dishwasher and I was so proud,” says Tanguma, who would boast about the perks of the job — such as free meals — to his friends. The next year, Tanguma joined the marines, but was kicked out when they discovered he was only 15 years old.

He later joined the army, where he was able to go to night school and earn his GED.

While stationed in Germany in 1968, Tanguma got a chance to paint his first mural.

“They wanted a volunteer to do some art work. I shot my hand up in the air thinking that all the other guys were going to so, but I was the only one who volunteered.”

The captain gave Tanguma postcards of scenery in the U.S., such as Mt. Rushmore and New York City, and told him to copy the images on the walls of a recreation center.

“I had never done a mural before,” says Tanguma, “I felt like telling the captain, ‘I don’t know how to do this,’ but I was scared of him.”

Tanguma discovered going from the page to the mural wasn’t that difficult for him after all, but he didn’t get a chance to paint another mural until he returned to the U.S. 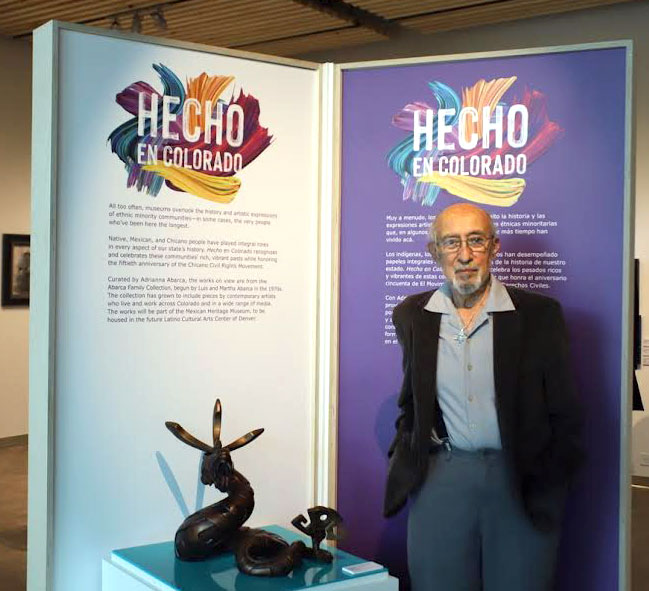 Leo Tanguma today, in front of an exhibit by Hecho en Colorado

At TSU Tanguma began to reclaim his identity and wrestled with what he calls a ‘self-denying complex.’

Tanguma returned to south Texas to interview Biggers and record his life story for three days shortly before Biggers died in 2001.

It was a story that included the same kind of prejudice Tanguma had become accustomed to in Texas. But Tanguma found that depicting injustices in his art brought light to matters that not everyone wanted to see.

“I did a mural condemning Houston police brutality, which was outrageous toward minorities and even more so against Mexican-Americans.”

Many were put off by the work. Tanguma says a woman from the art council suggest Tanguma just, ‘Go back to Mexico’ if he didn’t like what was going on.

Tanguma repeated what the woman said to the media, and says he had difficulty receiving funding after that.

Shortly after his first wife’s death in 1983, Tanguma came to Denver. It’s a move that revitalized Tanguma’s career.

Twenty years later, he is considered one of the premiere muralists in the west.

Tanguma’s colorful mural will be going up on the southeast corner of North Presbyterian Church on Federal Boulevard in April.

“What I would like to happen would be for the mural to attract attention and attract young people to the site to come see it,” he says, “so that myself or the other church members can explain to the young people what we’re saying in the mural.”

Beginning Saturday, February 1, Tanguma will teach his class, modeled on the course he taught an UNC, ‘Walls that Speak Like Mirrors.’

No doubt his students will find this normally quiet man has a lot to say.

Notes on this Article

It’s been interesting through the years to come across even articles in Spanish as the conspiracy theories surrounding Tanguma’s work only multiply, particularly regarding his pieces in the Denver International Airport.

It’s all part of the larger conspiracy theories about the Denver airport’s undeniable Masonic imagery and its supposed 10-floor secret underground bunker.

Tanguma’s Denver airport murals “Children of the World Dream of Peace” and ‘In Peace and Harmony with Nature’ and are at Level 5 of the Jeppesen Terminal.

The work has been called ‘apocalyptic.’

There was even a change.org petition to remove Tanguma’s work from DIA, titled ‘Demolish Demonic Displays.’

Beneath the airport is a fallout shelter and/or Illuminati headquarters according to conspiracy theorists, who highlight that the airport went two billion dollars over budget. I was in high school when construction began, but I remember the delays, public outcry about the cost and the air of mystery around the project. The airport’s original budget was 4.8 million, but construction ran two billion over that.

“The airport is equipped with fiber optic communications with a total length of 5300 miles. It is longer than the Nile River and approximately equal to the straight line distance from New York to Buenos Aires!” says one Russian website, which goes on to list other ways the airport is ‘overbuilt’ and question why different contractors were hired for various parts of the airport.

“This is completely absurd for an ordinary commercial airport” they say.

There have been questions about Denver’s ‘creepy’ or ‘weird’ public art for decades.

The sculptor, Luis Jiménez died in a horrible accidental death when a piece of the 9,000 pound work fell on him during a repair in 2006.

Tanguma’s work fits within the larger Latin American ‘Social Realism’ art movement (in the same tradition as some of Buenos Aires’ most famous pieces by Diego Rivera and Antonio Berni at MALBA), with a focus on human liberation and multicultural themes, but Tanguma’s work contains more ‘otherworldly’ and doomsday type imagery that critics say is an odd choice for an international airport.

Tanguma, for his part, brushes off the conspiracy theories.

“Leo’s murals at DIA are about saving the environment and world peace, totally unlike the garbage those people write about,” writes his wife, Jeanne in an email.

“They are just spreading lies. Leo’s work is about cultural identity, the struggle for social justice and peace, women’s liberation, etc. — to name a few of his themes.”

Conspiracy theorists do have a lot of material to work with when it comes to DIA and Tanguma’s work is just one little piece of the conspiracy puzzle.

For its part, DIA’s social media team has embraced the conspiracy theories.

The Illuminati meetings are held the third Tuesday of every month in room 659. Still no Cinnabon. #AskDEN https://t.co/oClj4x5bAj

#1: Leo Tanguma’s mural that will be placed on Federal Boulevard depicts a child’s parents injecting drugs

#2: Pastor Heidi McGuinness talks about the North Presbyterian mural next to her likeness and those of other church members.