Little Fyodor, aka Dave Lichtenberg is a punk musician in Denver who got his start in the band Walls of Genius and now plays in a band with his long-time partner (Babushka, aka Lauren Swain).

He also hosted a popular radio program, Under the Floorboards on Boulder’s KGNU for over 25 years. 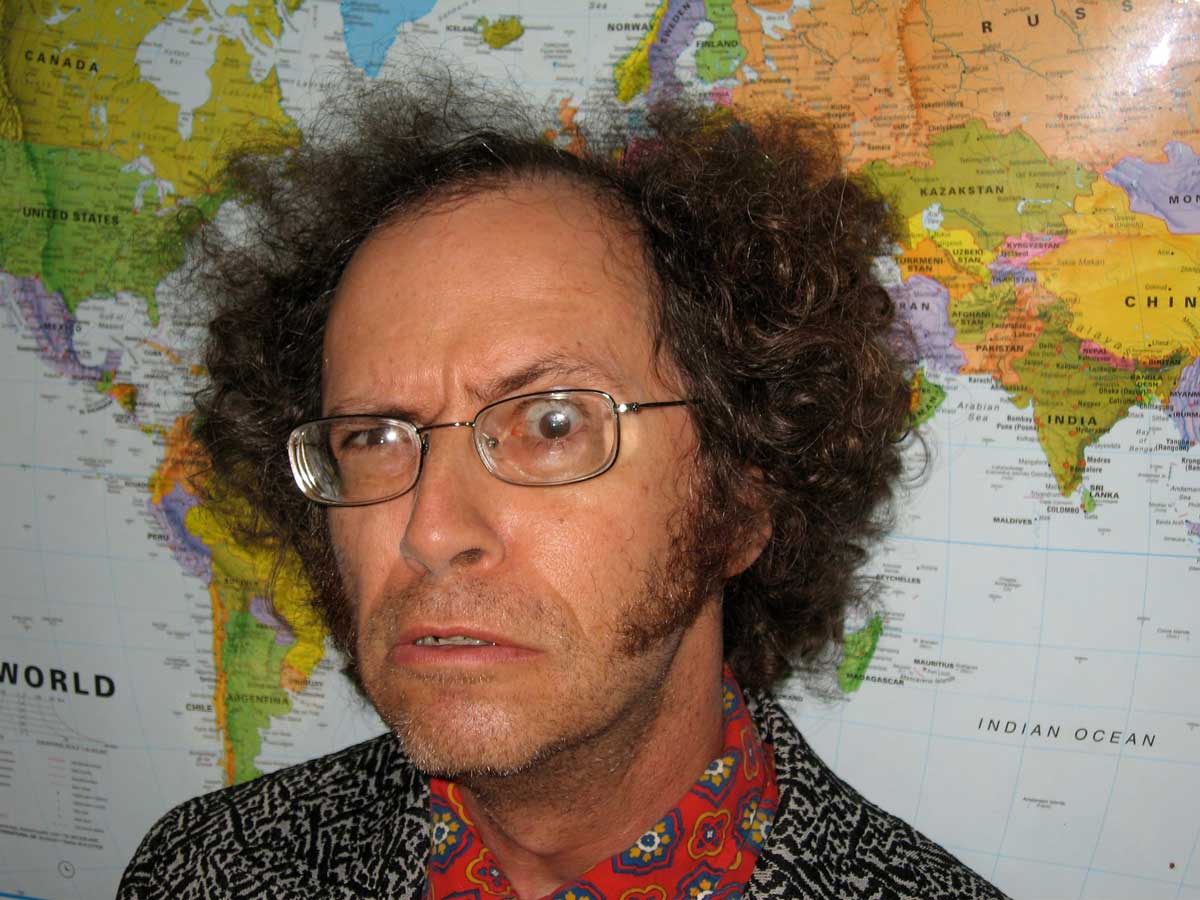 Highlands – Musician Little Fyodor has been described many ways: a musical Woody Allen, a punk Weird Al Yankovic, a metaphysical protest singer and Don Knots on acid. But the long-time Denver-Boulder fixture and North Denver resident, Little Fyodor, fancies himself as a comical Iggy Pop.

Influenced by late 1970’s sounds such as those from Iggy Pop, the Ramones and Pere Ubu, Little Fyodor makes music that fuses misfit angst and outrageous lyrics with catchy guitar riffs.

He’s been on the Boulder-Denver music scene since the early 1980’s when he got involved with Walls of Genius, a wacky Boulder punk band that made 30 cassettes in the span of three years. The band even got a mention in the book Unknown Legends of Rock and Roll, a bible of underground cult rock phenomenon. (Walls of Genius fell into the ‘Idiot Savant’ category).

Little Fyodor is also a radio deejay has reigned over his Saturday night radio show, ‘Under the Floorboard,’ devoted to obscure avant guard tunes, at Boulder’s KGNU since 1982.

Walls of Genius disbanded in 1986 and Little Fyodor began playing solo gigs, performing stripped down originals such as ‘Nobody Loves Me and They Got Good Reason,’ ‘All My Clothes are Uncomfortable’ and ‘I Want an Ugly Girl (Who’d Want Nobody but Me).’ Making music that is ‘lifting the veil off the neurotic side of life,’ Fyodor says his act causes the audience to feel sorry and laugh – and hopefully question.

“I deal with some unpleasant issues,” he says. “But I do it in such a lighthearted way that on one hand it’s both very serious — it’s not like it’s just a joke, but on the other hand, I kind of sugar-coat it with comedy because when you do that you can get more intense.”

In the last twenty years he’s developed a loyal Denver following and released a number of recordings including Beneath The Uber-Putz, Revolution 9, Idiots are Closer to God and 1994’s, Dance of the Salted Slug. Progressively more musically mature, the recordings are made up of comedic ditties about angst, sexual frustration and being a misfit. Little Fyodor also has a 45 (yep, that’s vinyl) with San Francisco grindcore band, The Haters on Noisopoly records.

Little Fyodor and Babushka at Denver’s Mercury Cafe in 2017

Little Fyodor first met his soon-to be sidekick, Babushka at a downtown bar in 1986 where Fyodor was performing with Walls of Genius. Little Fyodor thanked her for having the courage to take the dance floor alone.

At the time, Babushka was in what she calls a ‘cheesy rock band.’ Walls of Genius soon disbanded and the two started jamming together. Beginning their 35-year relationship and joining the band was an act of Old World mercy, jokes Babushka.

“He looked very brainy,” she says. “I thought he was some burnt-out lawyer who had seen too much.” Life recently came full circle when the couple opened for Minneapolis band, the Frogs, at the same downtown bar where they met. 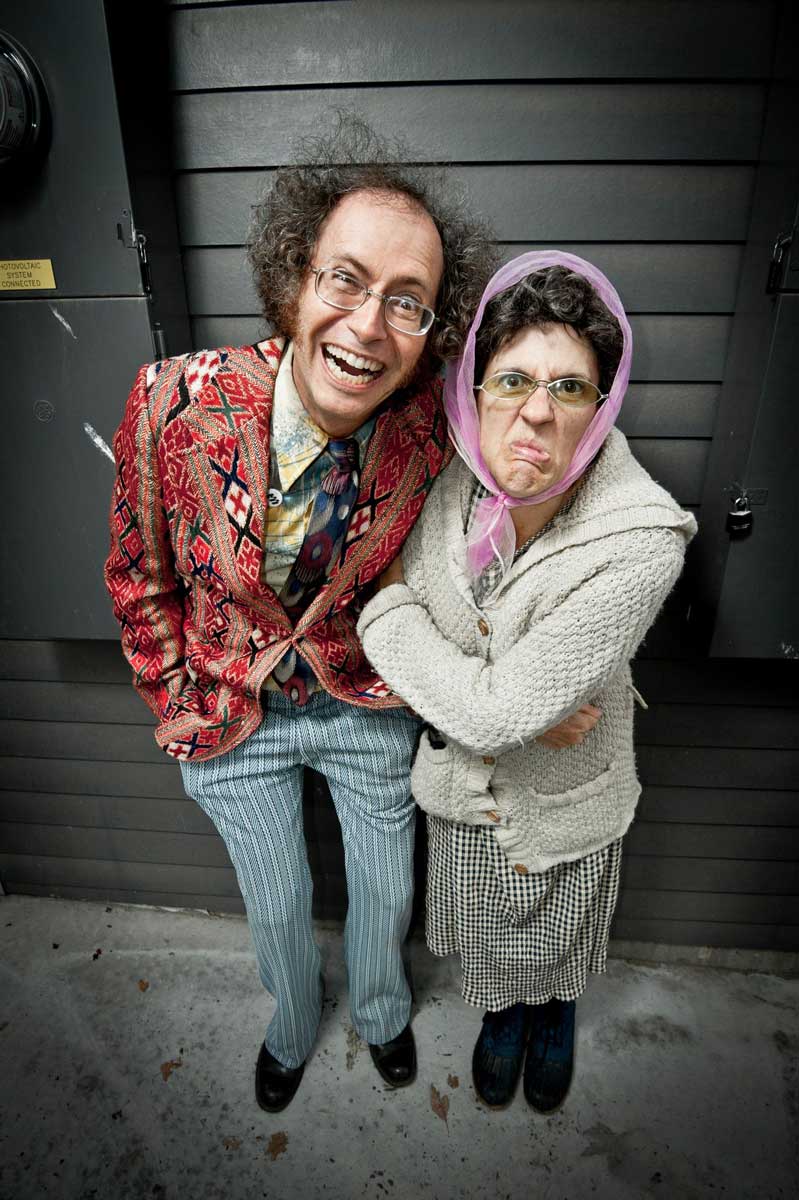 Besides sharing what Babushka refers to as ‘intrinsically stressful’ Jewish blood, the two share an appreciation for the oddities of life.

The grimacing Casio-playing Babushka stage persona is inspired by Gilda Radner, the Where’s the Beef? lady, and the ‘sexy old granny’ from Beverly Hillbillies says Babushka. While a lot of women wouldn’t jump at the chance to appear on stage dressed as a mean little old lady, Babushka relishes it. “I can still be sort or sexy and sassy at the same time and yet I don’t have to make sure my eyebrows are plucked. And I can still shake it.”

The ‘Dance of the Salted Slug’

Perhaps the highlight of every show is Little Fyodor’s ‘Dance of the Salted Slug’. It is an epileptic seizure-like spazz-out across the dance floor inspired by the torture of slugs he enjoyed as a twelve-year-old boy. “I can’t say that I’m real proud of it,” offers Fyodor, who mimics his dance moves from dying slugs nonetheless.

Despite their nerdy nature, parental units beware: Little Fyodor and Babushka are far from PG-rated. Religious persuasion? They are members of the Church of the Subgenius, a hedonistic want-to-be holy rolling parody of the Southern Baptists. The church even has a guarantee: Eternal Salvation or triple your money back. For a nominal fee, the church also offers immunity for all sins, personal faults and crimes. “What more do you want?” asks Fyodor.

The rocking duo experienced what they say was one of their best audiences at the church’s yearly gathering in upstate New York. Little Fyodor also did a European tour with other ‘church members’ in 2001. Little Fyodor and Babushka also performed at the 1998 Burning Man Festival, the now-world renown festival in the Black Rock Desert of Nevada.

Little Fyodor a.k.a., Dave Lichtenberg leads somewhat of a double life, holding down a straight-laced job during the day. Babushka, a.k.a. Lauren Swain works as a jeweler and graphic designer. The new age circles in which she conducts her jewelry business might also be somewhat surprised to know the affable Swain has a sour-faced fashion-impaired rock star within.

Fyodor aims to compartmentalize his day and night-time personas (he once lost a job after a friend revealed his alter ego) but says, “It’s not like I’m going to shy away from doing what I believe in just because it pisses people off.”

His music “Does push people’s buttons sometimes,” he says. “Why that is, you’d have to ask those people, or hypnotize those people or psychoanalyze those people.” Case in point: a guy at a metal club in Denver kept screaming “Suicide!” as an invitation to the band while they played one of their favored tunes, “I Don’t Know What To Do.”

Little Fyodor and Babushka let the comments of hecklers roll off their backs and have refreshingly little emotional investment in trying to make it to rock star status.

“The music industry is a rat race. Of course I wouldn’t deny it — if some one offered me a ten million dollar contract I’d probably take it, but I would also know I was signing a deal with devil,” says Fyodor. “It’s no big deal to me if I never make it in the music biz.”

“Part of it is that everyone wants to be a rock star,” adds Lichtenberg.

So what is in the future for North Denver’s musically inclined odd couple? Little Fyodor has a characteristic prediction: “More wrinkles.”

Babushka, Little Fyodor, Ande Wanderer (yours truly) and a very handsome incognito friend (who doesn’t do internet) posing before a stage at the Mercury Cafe in Denver in 2017