You are here: Home / Travel / The Holy Coast of Kenya: Mombasa, Lamu and Beyond
Vagabond-column-Kenya-Lamu-Mombasa


When most people imagine Kenya they conjure up images of safaris, elephants and Maasai warriors, but there’s another side of Kenya for visitors, a laid back alternative to the adrenaline rush provided by animal chasing on the plains.

It’s the mellow Swahili coast of the country with its eclectic cultural, delicious deserted beaches and a temperature hovering in the 70’s at this time of year.

Here, you’re not just visiting another country, but another era. It’s a place where time is measured as it would have been centuries ago. No need for a watch, just observe the sun, the tides, and the calls to Mecca. 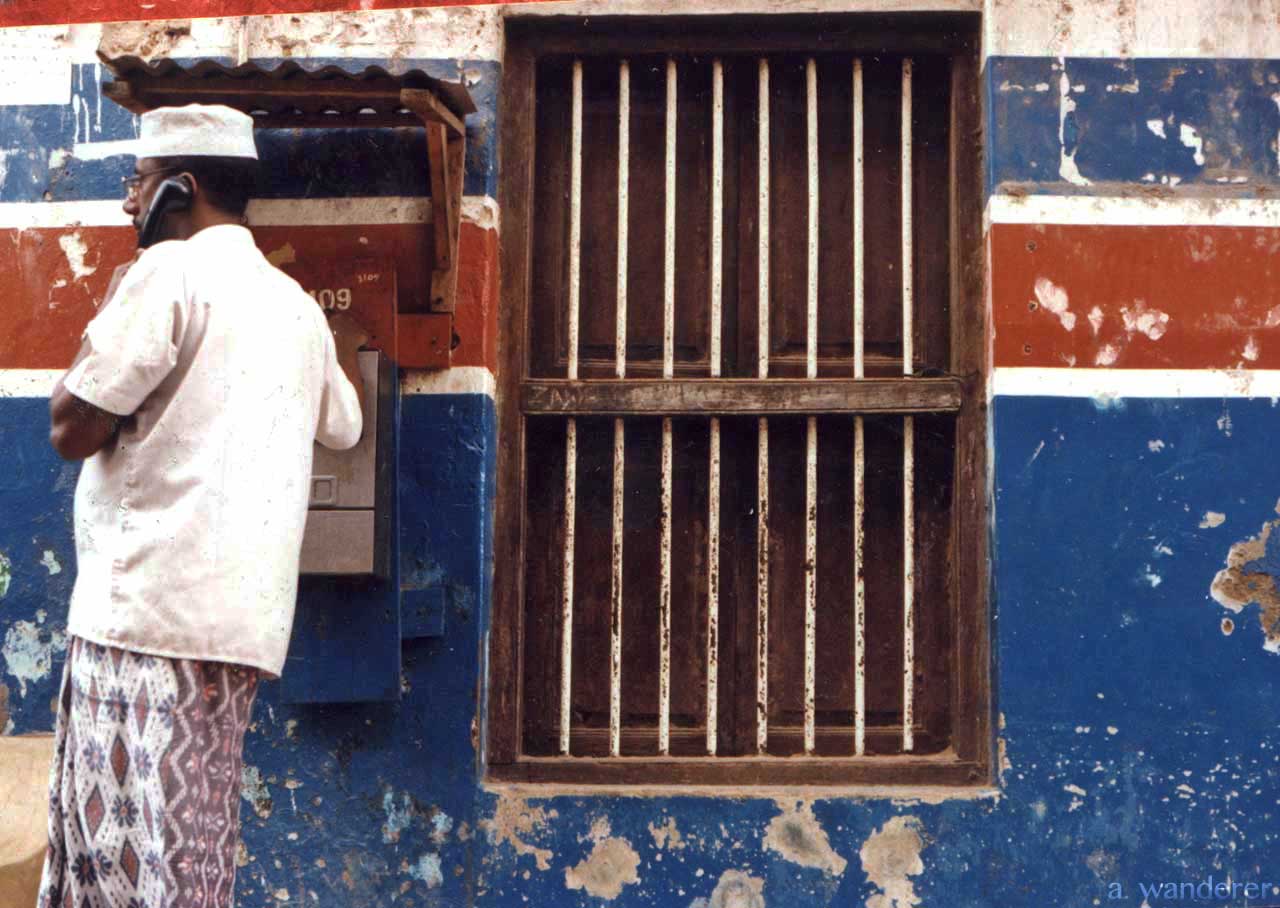 A man in traditional Swahili dress in Mombasa

The first stop on the coast for most will be Kenya’s second largest city, Mombasa, one of East Africa’s oldest settlements.

The city’s 2000-year history as a valuable trading port means its culture and architecture is a whimsical global mix with influences from Persia, Portugal, Turkey and Britain.

The layers of time can be uncovered in the Old Towne, where narrow streets are lined with carved doors and balconies.

Ft. Jesus, built during the Portuguese occupation of the l6th century, was later converted into a jail by British colonizers and is now a museum and favored place to examine centuries worth of graffiti.

Sprawling Mackinnon market is a wonderful place to get lost, sample street food and barter for just about anything.

Further north along the coast is the enigma known as Malindi, a seedy, mafia-run town where Italian is the top language and prostitution and drug smuggling are central to the economy.

The town, visited by Portuguese explorer Vasco de Gama as far back as 1498, is today legendary for its hedonistic expatriate culture. Local legend has it when Ernest Hemingway came here to fish, he got too drunk and never made it.

Most Kenyans avoid crime-laden Malindi, but it’s worth checking out, if only as a sociological phenomenon, and if you’re a mobster needing to lay low for a while, you can get a tan while you hide out.

The sandy beaches and many coral reefs in the region are the main natural attraction, best seen at the nearby Malindi National Marine Park or further south in Watamu. 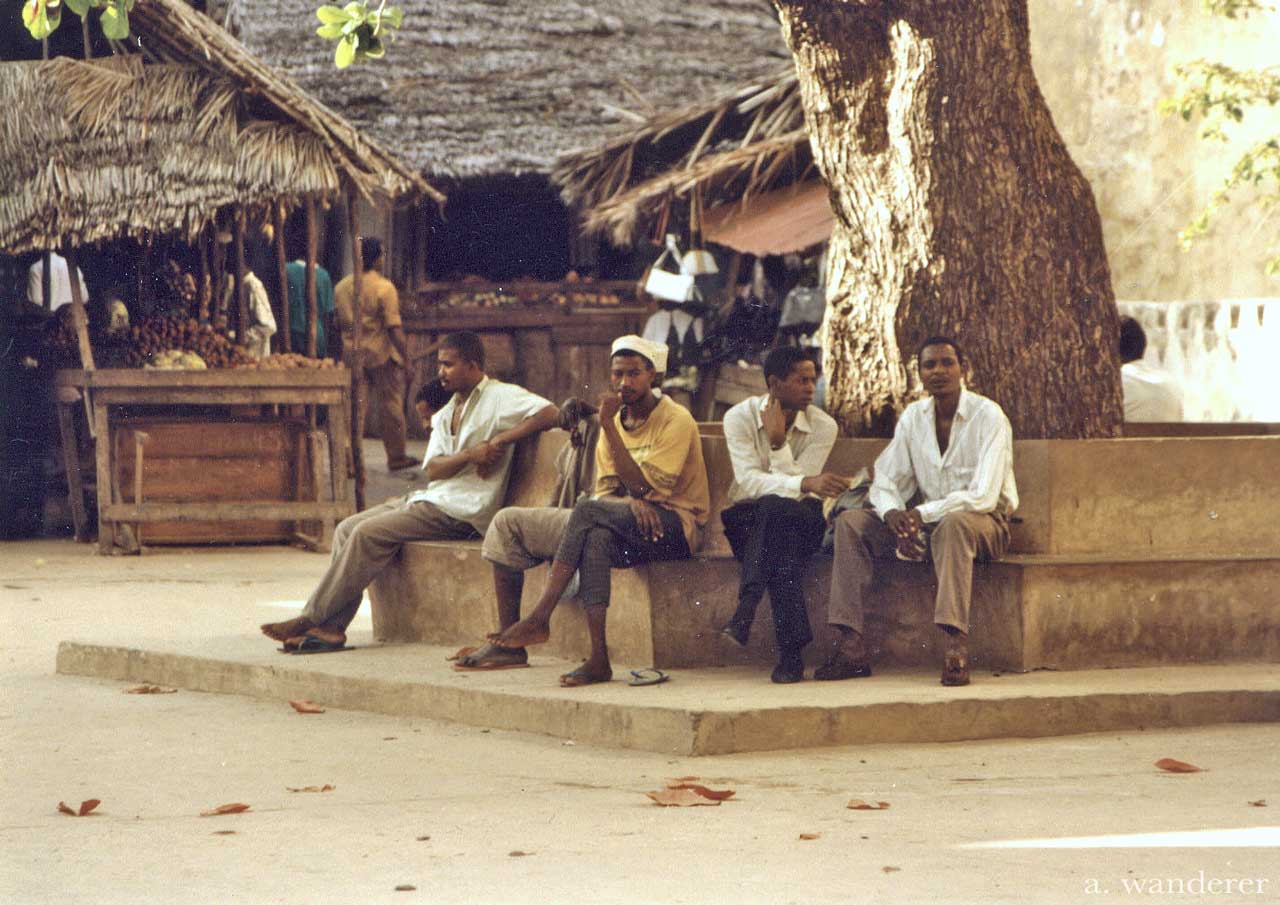 Getting to the idyllic island can prove difficult to the economically-challenged traveler, though. One option is to take a matatu (Swahili for ‘suicidal overstuffed van with blaring music’) a bus or a bushtaxi on a dilapidated highway to heaven ruled by Somali bandits.

Sometimes it’s possible to hitch a ride from Mombasa or Malindi on a dhow, as the wooden single-masted sailing boats in the region are called.

Most folks opt to get to Lamu by taking a small passenger airplane. At the urging of locals, who warned about danger on the highway to Lamu, I grudgingly shelled out the shillings amounting to about $79 for the plane as well. The thirteen-seater passenger airplane in a country not held in high esteem for its airline safety standards seemed a rather daunting option in and of itself.

Somehow we got to Lamu’s tiny airport on a neighboring Manda island unscathed. From there it is only a short boat ride to the island.

Arriving at Lamu from the Mainland

The first thing one notices sailing into Lamu’s port is the dozens of temperamental donkeys meandering around the shore front. Donkeys are the main form of transporting goods on the island, and the legions of cranky beasts around the docks are residents at a nearby donkey retirement house.

Lamu has no vehicles, or roads for that matter, only the labyrinth of narrow passageways lined with craft shops that just beg you to get lost among them.

A 45-minute walk north from the town center brings you to the sprawling white sand Shela Beach, where there are a few high-end western-style hotels

Dotted along the shorefront, under the cover of trees, are chai sellers serving tiny cups of sweet mint tea. Sitting down to discuss affair’s and sip tea under the Baobab tree is a common Lamu pastime and the key to discovering real Swahili culture. Covering up and heading into one of the island’s 23 mosques is another good way to get a handle on the culture.

Though some westerns are initially wary due to small number of high-profile fundamentalist sects that have infiltrated the Kenya coast, Swahili culture, deeply rooted in Islam, is peaceful and rich.

Despite Lamu’s traditional Swahili values the tourism industry has spawned debaucherous counter-culture. Beach boys —as the dreadlocked touts dependent on the tourist industry are referred to — are to be dealt with cautiously.

Charming as they might be, wacky hijinx will surely ensue if you get wrapped up into their pitches. If all you got talked into was staying at someone’s ‘brother’s hotel’ you could count yourself lucky — plenty of pleasure-seekers have returned home HIV positive from sleeping with beach boys or local prostitutes. 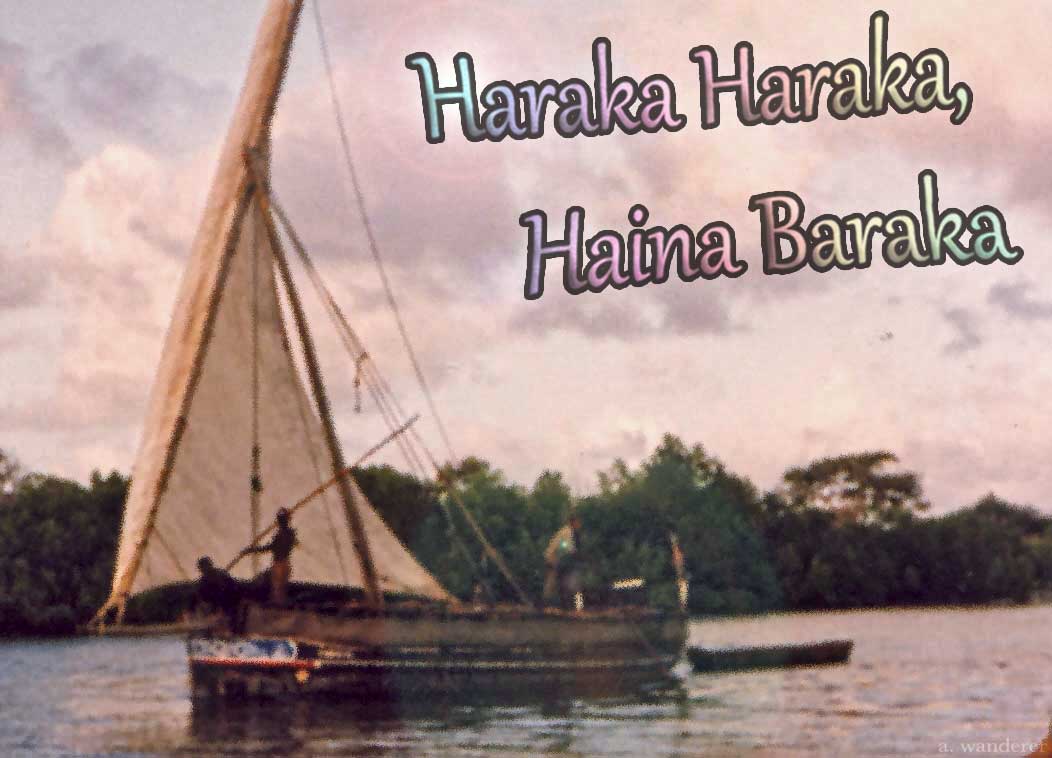 From Lamu you can charter a low-key trip on a dhow, the beautiful old-style Arab trading boats.

One stop is sure to be Pate Island, where there are ruins dating to the Sultan age scattered about the isle. Most don’t stay overnight, as there are nicer beaches to anchor at, but Pate is a place to seek out some coconut juice and swim with the locals who are thrilled to have visitors — without newspapers and radio the islanders are happy to entertain.

Another unadulterated paradise where you’ll want to find yourself a castaway on the Lamu Archipelago is Kiwayu. There is a hush-hush upscale development for the rich and famous somewhere on the island but you can anchor in your own private little niche.

After a few days with no electricity, pavement, pollution, news, social media or modern conveniences at all, you’ll feel like pagan castaway, frolicking around in the flesh, (there’s no one around!), exploring the natural caves lining the beach and floating in the gentle, clear blue ocean.

On the easy-going coast of Kenya, there is a Swahili saying central to the lifestyle:

Haraka, Haraka, haina Baraka — ‘ln a hurry, there is no blessing!’

After a taste of unadulterated paradise, you’ll be saying amina (amen) to that.

When to Visit the Coast of Kenya:

The Mombasa/Lamu area of Kenya has a pleasant tropical climate all-year round. The rainiest months are the winter months of April-July and the warmest months, with daily temperatures reaching over 30 c (87 F) are from November until March.

Best Place to step back in time and have run-ins with cantankerous donkeys: Lamu Island

Best Place to pretend you’re on the set of Blue Lagoon: Kiwayu Island