You are here: Home / Travel / Hampi: City of Victory
AW-travel-hampi


Any place with a temple dedicated to the dancing God from the Bhagavad-Gita (that is um, Shiva) is okay by us.

It’s like a petrified dream taken from storybooks of ancient Hindu mythology: red rock structures framing the landscape and ruins.

This is Hampi, the modern-day capital of the Vijayanagar empire. Located in southern India’s Karnataka State. Vijayanagar (which means ‘City of Victory’) was established as a Hindu capital in 1336 A.D. although most historians agree that it had been inhabited for at least 1000 years previous to that date.

The Empire once stretch from one coast of India to the other and was enormously wealthy. Persian and European explorers often wrote home about the markets, saying they overflowed with jewels and gold. When Muslims invaded in 1565, the site was pillaged for six months and then abandoned. 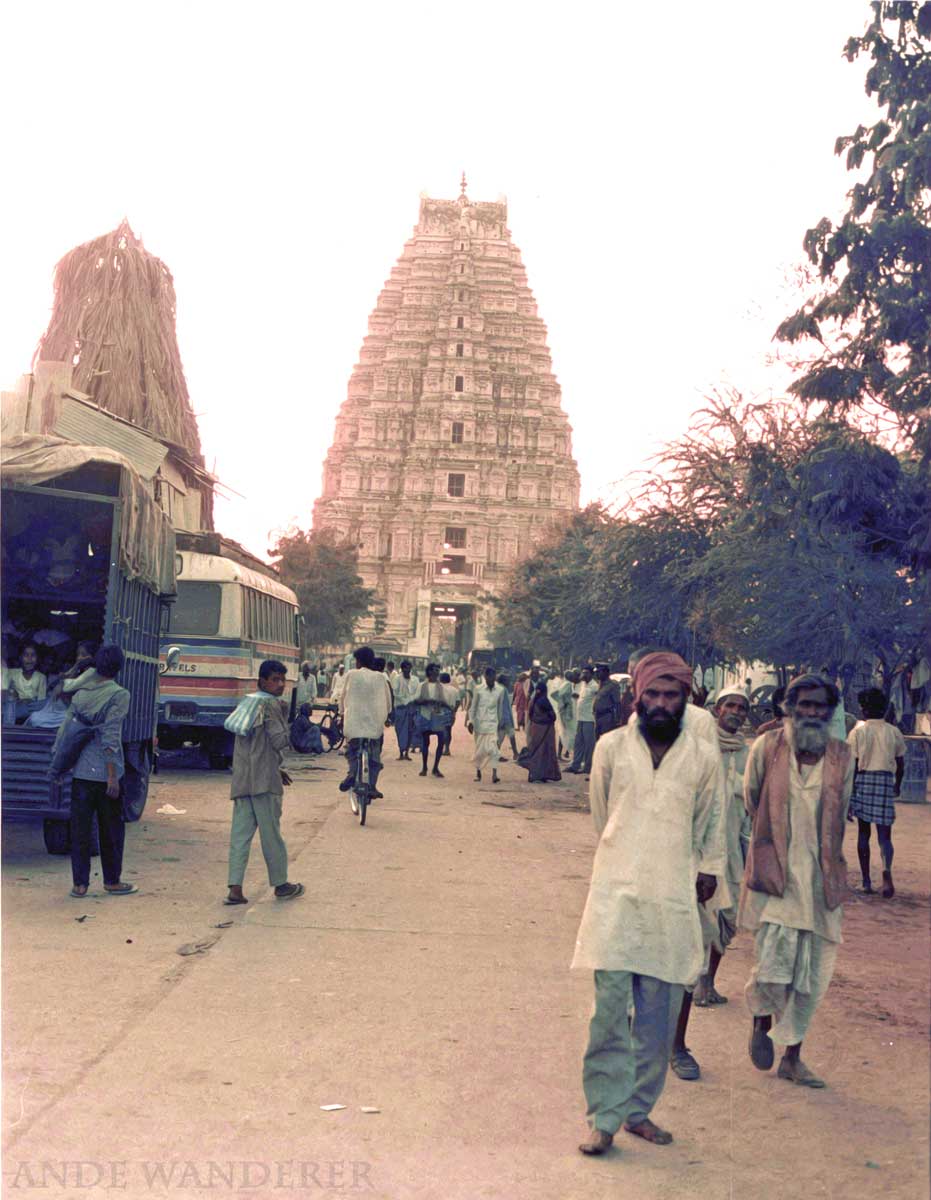 → Book a two-day tour to Hampi from Goa*

*We may earn a commission from links

The first view to greet the traveler is the 10-story tower of the Virupaksha temple complex. The monument intricately decorated façade overlooks the city’s bazaar. The temple, dedicated to the Hindu god Shiva, is still used today, as is the nearby ghat, the towns public bathing place.

The Vitthala Temple, which was named a World Heritage Monument in the eighties, has 56 columns that create musical notes when struck. Although locals strongly discourage touching the structure they are happy to demonstrate how it’s done.

Among other sites is the Lotus Mahal, reception hall for the King, and the multi-domed elephant stables, which once held 10 of the royal mammals used for ceremonies and battles. The countless cave shrines and their symbols give more clues to how the majority of the population lived back then. Sadhus, those who dedicated their lives to their religion and meditation, still inhabit many of the caves.

The few explorers who find their way to Hampi are mostly Western hipster seeking transcendental experiences or ‘freaks’ as they’re commonly called by locals. Most come from go on psychedelic buses to attend full moon parties, and then he end up staying long after the parties over, putting an interesting spin on the normally laid-back copy life. 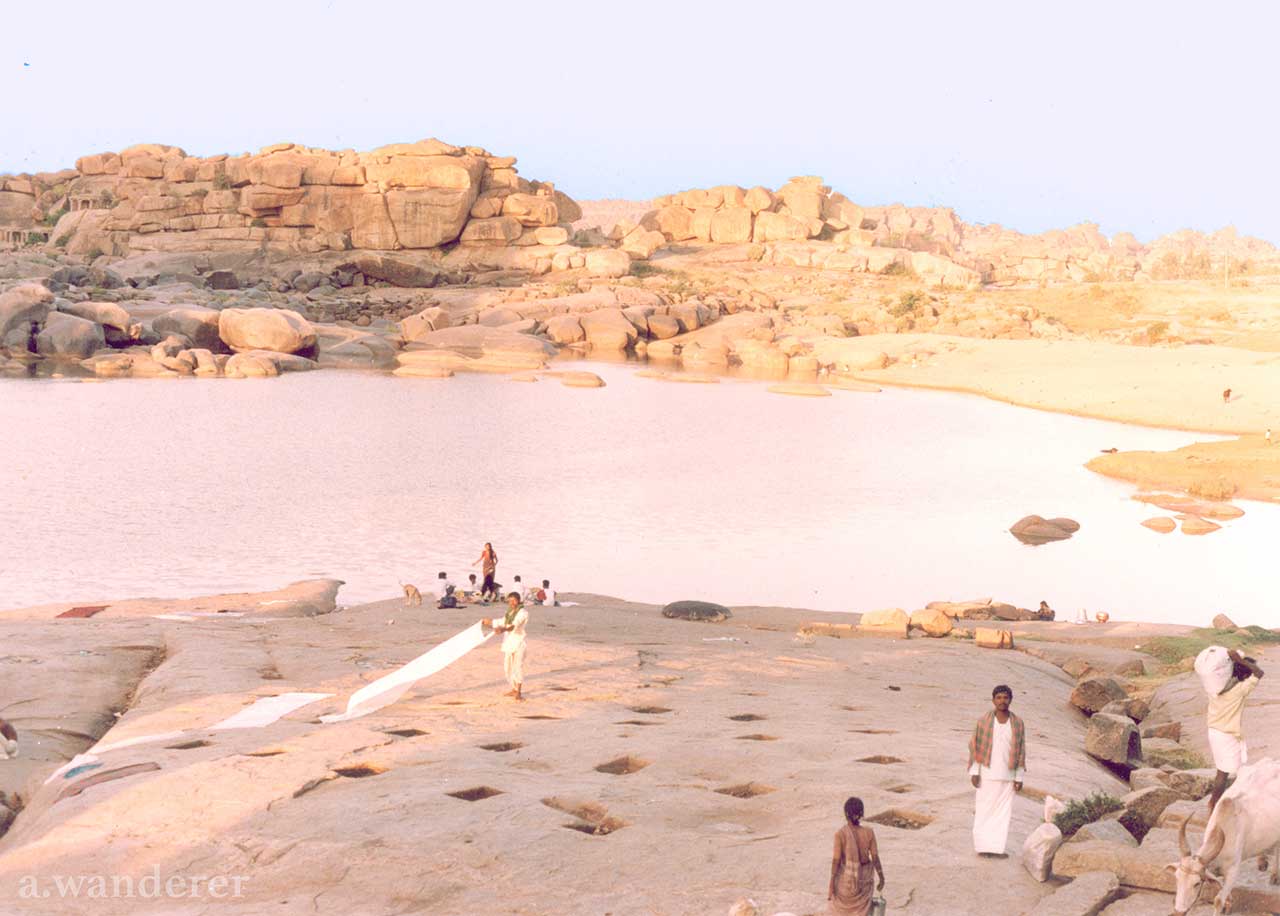 Local sometimes invite visitors to join them in washing clothes on the river bank, or to sip tea at the marketplace where they pedal their wares.

Many of Hampi’s 17-square miles of carved- rock buildings were destroyed during the Muslim invasions, but visitors still find its otherworldly flavor endlessly appealing. Interested travelers, who double a suitcase schleppers, should beware: getting there can be difficult. The only way to reach Hampi is in a three-wheeled auto rickshaw that sets out from the nearby dingy service town of Hospet.

Comfort doesn’t matter: while most trekkers consider themselves lucky to get a room in an ashram without utilities, others just crash among the ruins for the night.

Hampi, half a world away and defiantly embedded in another time, will make you feel holy no matter where you sleep. — Ande Wanderer (Text and photos)

‘Hampi: City of Victory’ was first featured in Blue Magazine and was a winner of the ‘Best of Blue’ award. I found the old email from saved AOL (!) data informing of this ‘award’ which meant I won the prestige of having the article republished without additional payment. Also note how it eludes to ‘slow editorial payments,’ — the ‘trickle down’ struggle of trying to make it in the publishing world is real.

Congratulations! We are pleased to announce that one of your editorial
contributions to blue magazine has been nominated for our “BEST OF BLUE”
awards, to be announced in connection with the publication of blue1s 5th
year anniversary issue. You are among a pool of nominees, from which will be
selected first place winners, a selection of whose articles and photos will
be re-published in our August issue, BEST OF BLUE.

It has been a long five years since publication of blue1s first issue in
summer 1997!

As an independent magazine, blue has struggled to continue publishing
through tough times. We have experienced our share of challenges, including
slow editorial payments. We are happy to report we are currently up to date
with all editorial payments.

This past October blue won the FOLIO Award for Editorial Excellence (Travel
Category) with long-established Travel + Leisure taking second place. We
hope this is a sign that innovation is still possible in the magazine world.
The credit for this prestigious award goes to you, the writers and
photographers, who have made blue what it is today.

Please respond to this email, making sure Leah Pence, our Managing Editor,
has your current email, telephone and address information. Leah will be
contacting you over the next two weeks to go over all the details of the
BEST OF BLUE awards, and will be able to let you know which of your
contributions have been nominated.