Denver’s Lake Steam Baths is a family-run bath house and spa on the Mile-High city’s most famous street, Colfax Avenue. Open since 1927, it used to be a place where Russian-Jews would go for ceremonial schvitz.

Today, this Denver institution is open to anyone seeking a relaxing, affordable no-frills day spa experience. 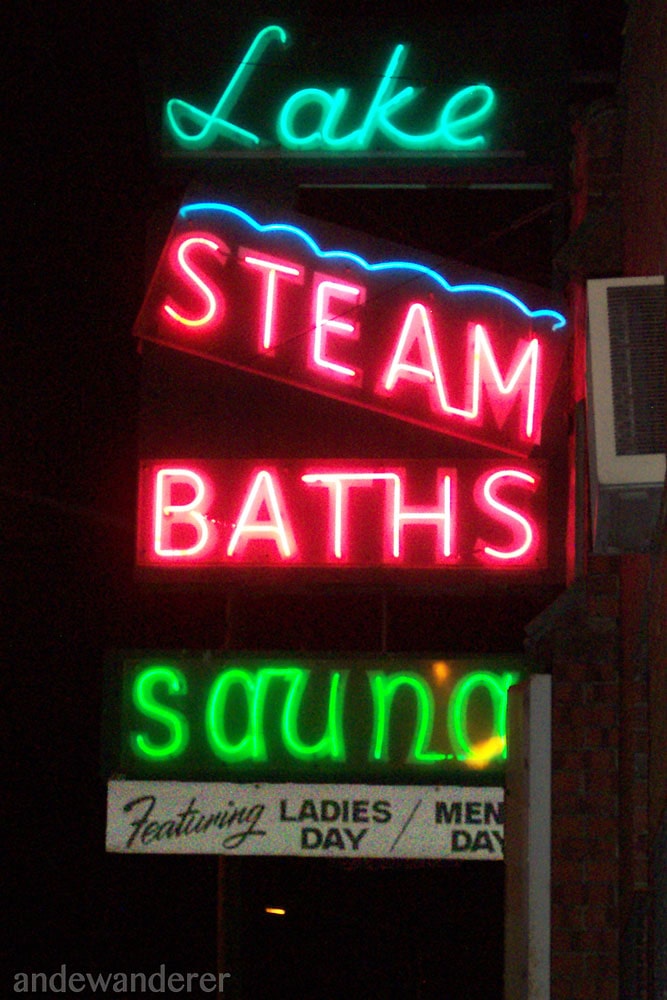 There are a few places on Denver’s rag-tag West Colfax that give you the feeling you’ve stepped back in time. The city’s most famous strip has seen dramatic changes throughout the decades, but one establishment, Lake Steam Baths, has remained pretty much the same since opening in 1927.

The ‘Lake Russian and Turkish Baths’, as they were then known, were built by Russian immigrants, Harry and Ethyl Hyman. The baths served as a social gathering place for a booming, predominately Russian-Jewish community in the area. At that time, the baths were not only a reminder of the motherland, but also a place for religious ceremonies.

Until the mid-1950’s, there were Mikvah cleansing ceremonies for women, which proceed marriage and the Sabbath.

“There was a large Jewish community here,” says Harry Hyman’s grandson, Hannon, who now runs the business with his wife, sister and brother in-law.

“My grandfather built it, I guess for them. A lot of the Jewish community has moved out, but it wasn’t just made for the Jewish people. It’s always been for everybody.” 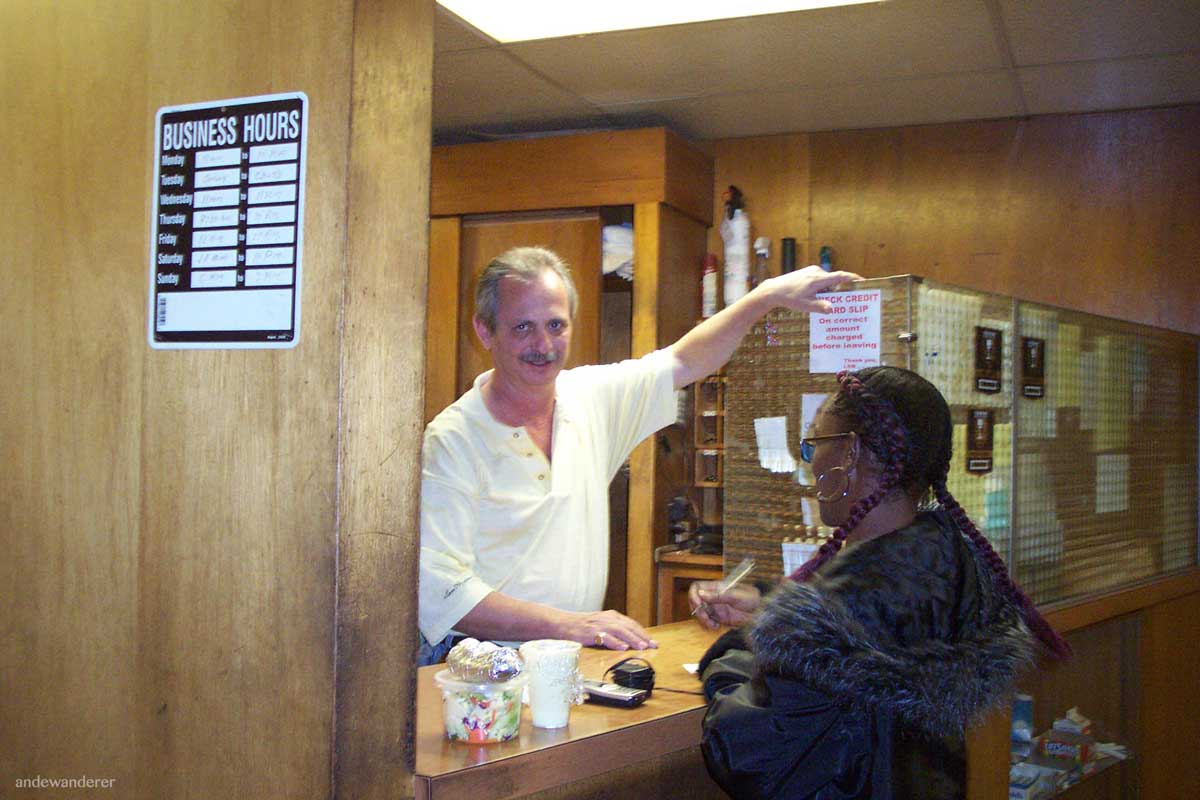 Today, if you venture to the steam baths, you’ll usually find Hannon Hyman behind the counter, looking after customers and handing out locker keys, with his son, Sam, in tow.

When Hyman was a kid, they stayed open all night on Saturdays. He can still remember helping out in the kitchen when they were short on employees.

“It’s always been pretty much the same. It doesn’t change much,” says Hyman. “It’s always been a steady business. There are people from all walks of life that have always liked the steam baths and the saunas, because that’s how they were brought up.”

While the number of men coming with their sons has gone down over the years, Hyman says there are now more mothers coming in with their daughters. There are also a growing number of young steamers, 20-40 year-old women arriving in pairs or groups.

For some reason, not the least of which is its West Colfax location (between an auto body repair shop and an ‘adult theatre’), some folks who have never been to Lake Steam Baths jump to nefarious conclusions about the place.

A neighbor who lives off of Colfax seemed surprise to learn there is nothing illegal going on at the bathhouse.

“I’m just ignorant,” said Micah Schaffer, a former resident of the neighborhood, when asked why he assumed it was a sex-oriented business.

“I guess it’s just this society. I assumed since it’s a bathhouse there must be something shady going on.”

Even subcontractors who do scrubs and massages at the steam baths are sensitive to these assumptions.

“We don’t want people to know we work naked on Colfax. We don’t like people to read that,” says one long-time steam house employee, who has worked there for 22 years giving exfoliation treatment.

“It’s hard to believe there’s a place like this here in Denver. If you don’t go there, you don’t know what’s going on,” she says, going on to describe the very strict rules of the bathhouse, which include no sexual contact.

After getting a key for a locker, a small towel and a sheet, patrons move on to the locker area to undress. From here, they step into the large bath area where there are showers, a whirlpool area and tiled benches to lounge on.

For a nominal fee there is the ‘soap and scrub’ exfoliation treatment very similar to those you would receive in the Russian banya or Turkish hammam, half a world away.

In the rear of the bathhouse there is a large dry sauna area and a separate steam room. Customers can stay as many hours as they like for a modest entrance fee. For an additional cost there are massages available by appointment.

Many swear Lake Steam Baths has the best and least expensive massages in the city. To complete the relaxing experience, there is a lounge area with a television and a deli serving traditional favorites such as ruben and egg salad sandwiches on rye.

At one time, Denver had several bathhouses that catered to the general public. (Today, Denver’s three other bathhouses are exclusively for gay men.) Most closed down during the beginning of the AIDS epidemic, when there was still uncertainty among the public about how the disease was contracted.

Withstanding the Test of Time

Lake Steam Baths has stood the test of time without much of a need to aggressively market. Even the bathhouse’s brochure looks like it was printed in 1962. Though it touts itself as, ‘The Most Exclusive Bath House in the West,’ it’s not exactly for the ultra prissy.

It’s also not for the obsessively shy.

“They’re very uncomfortable, a lot of (the patrons). You should see some of the gals that go in there. It takes them like ten minutes before they undress, but once they get in there, they love it,” says one employee.

“It’s usually a religious thing,” Hyman adds. “People are brought up that they can’t do that. That’s totally their prerogative.”

Those who do enjoy the bathhouse tend to return frequently, especially in the winter.

Perhaps the greatest endorsement of the revitalizing effects of the steam baths are the old-timers such as one 97 year-old man there last Saturday. Despite nearing triple digits, he rides the bus to visit the baths once a week.

“I’m not a doctor but it’s good for your skin and the steam seems to do people good for their sinuses — you know, the eucalyptus in there. Sweating is always good. It rinses all the toxins out,” says Hyman, who adds that his family has no plans to change the formula that has kept the bathhouse in business for so long.

“I just hope we continue for another 75 years,” he says.

By prior appointment services include a 55 minute massage, soap scrubs, reflexology and a detox foot bath. 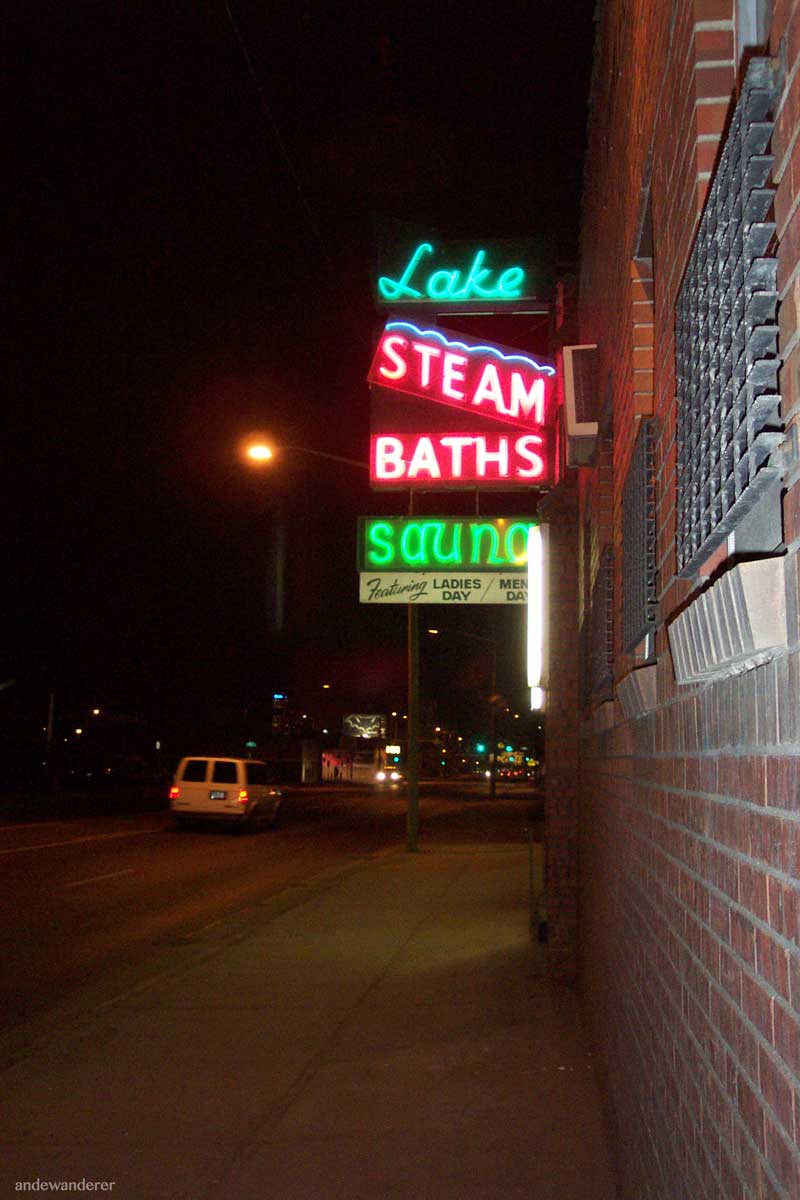 Notes on this Article

Hannon Hyman died in 2015 and the baths are now run by his wife, Amy. According to this article, the once-seedy West Colfax location is becoming more attractive to the general population and Amy Hyman has revamped the spa to keep up with changing times.

But now with the COVID-19 pandemic restrictions, Lake Steam Baths is struggling to stay above water and even has a GoFundMe campaign to save the business.

Since restrictions have been somewhat loosened by the state of Colorado they have been weathering the crisis pretty well by allowing people to book in groups. This means that for the first time, members of the opposite sex in the same group can bathe together privately.

Now that transgenderism has become a more mainstream phenomenon since this article was written, I was curious how this old school gender-segregated business handled customers who identified with a gender that doesn’t match their biology. It turns out they have received complaints from at least one transwoman denied service who wanted to go on ‘ladies day.’

Denver Lake Steam baths and similar businesses could unwittingly find themselves on the front lines of the culture wars. The business was originally a place for purification rituals for religious Jews. Today, if biological men are permitted on ladies day,  tzniut laws pertaining to modesty would, in turn, prohibit Orthodox women from using the baths in their presence.

Another interesting note is that there is still no wifi available in the steam baths or lounge. How’s that for old school?