The Denver residential neighborhood of Sloan’s Lake in Northwest Denver has increasingly become a gathering place for homeless people.

Due to its distance from downtown, the demographic of homeless here includes those who want to avoid the downtown drug scene: veterans, former foster kids, senior citizens, the mentally ill and families.

“I pray to God every night that I don’t come out here and find someone floating face up in the lake,” ‘Little Mike’ Quintana, manager of Sloan’s Boxing Club said last week.

The statement turned out to be an eerie prediction. Two days later a body was found floating in the southwest corner of lake about 40 yards from the boxing club.

Tim, a homeless veteran was sitting at his regular park bench Friday afternoon in Sloan’s Lake Park when he noticed what appeared to be a pair of human feet sticking out of the lake. Upon closer inspection he realized it was a body, a fallen brother of the street. He asked the first person he saw with a cell phone to call 9-1-1.

The body was that of 50 year-old homeless man, George P. Rael. The Denver County Coroner’s office says the autopsy results indicate no foul play — he died of an accidental drowning. A toxicology report will be out later this week.

The homeless population around Sloan’s Lake is only a microcosm of the growing problem across the city. There are now 9,725 homeless people in Metro Denver according to a recently released report by the Department of Human Services.

By comparison, in 1990, Denver’s homeless population was less than 2,000 people. The circumstances of those facing life on the street today run the gamut from disabled vets like Tim, to the mentally ill, impoverished families, alcoholics and drug users and regular people who just ‘fell through the cracks.’

At a recent Sloan’s Lake Citizen’s Group meeting a few people complained about the numbers of homeless people in the park ‘nesting,’ as one person called it.

Some said the homeless people are drunk and rowdy and panhandle around the neighborhood. They asked then District 1 Commander Brian Gallagher what they could do about it.

“If there’s no other crime being committed, it’s not against the law to be homeless,” said Gallagher.

He added that Denver has no vagrancy or loitering ordinances. The police are only empowered to enforce against aggressive panhandling. 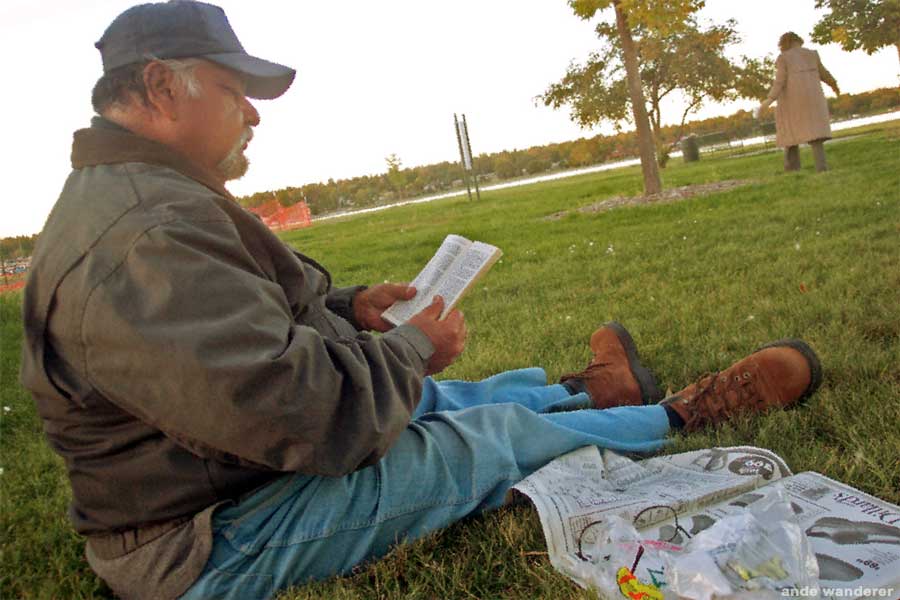 The Varied Circumstances of Homelessness

Dave Garcia became homeless just this year, when he was forced into early retirement and couldn’t find another job. His girlfriend became homeless many years ago after an accident resulting in a head injury that left her mentally disabled.

Perhaps the most notorious homeless person around Sloan’s Lake for frustrated residents is the ‘shopping cart lady’, who cusses at people and inanimate objects and whose random outbursts have alienated her even from other homeless people who ban together.

Also residing in the park is eighteen-year-old Sarah who went straight from foster care to the streets. She bounced through eight foster homes in the last four years after her biological mom became a crack addict.

When she became of age, her government benefits were cut off and she joined her boyfriend, Eli on the streets. They sleep on a pile of rocks underneath a footbridge at the park, which at least gives them coverage from the elements.

Sarah is perhaps the most spooked by the recent death at the park — her trademark prop is a golf club she carries for protection.

Katherine with her big blue eyes and gray hair looks like she could be somebody’s grandma. At nighttime she sleeps at the nearby Brandon Theodora home for women and children. During the day she packs up her belongings in plastic bags and walks to the park to sit and wait for the shelter to reopen for another night.

When asked how she became homeless she says simply, “I ran out of money. I’m a senior citizen.” She’s one of many at the park whose old age pension doesn’t come close to paying for even a studio apartment in Denver.

Two year-old Luv isn’t old enough to comprehend the sadness of spending her 2nd birthday in the park, with nowhere to call home and only dry cereal to eat. Under the care of her parents, Melvin and K.C. she has been bouncing from shelters to motels to the backyards of friends.

After exhausting their emergency vouchers for motels for the month, Melvin left his family at the park to try and get rehired at an old job last Monday. He said he’d return at 1:30 p.m. By nightfall he had not returned. In tears, K.C. put the warmest clothes on her daughter and began to try to figure out the safest place in the park to sleep.

John Parvensky, President of the Colorado Coalition for the Homeless says the boom in homelessness can be attributed to obvious economic issues. The homeless have become more visible in residential neighborhoods because of exhausted resources, cuts in funding and increased development along the Platte River Valley, says Parvensky.

The homeless have been pushed or crowded out of downtown and, often in the interest of their own safety, move into more residential neighborhoods such as Sloan’s Lake. But they are not particularly wanted by residents such as those in the Sloan’s Lake Citizen’s Group.

“Being homeless is not a crime,” says Garcia, “but sometimes it can feel like it is.”

This is the first in a series of articles profiling the homeless in North Denver. Next week, Yesterday’s Heroes, Today’s Homeless: the Plight of Homeless Veterans.

A: Homeless teen, Sarah points with her trademark golf club to the place where the body of a 50 year-old homeless man, George P. Rael was found last Friday.

B,C: Homeless teen, Sarah takes a nap in Sloan’s Lake Park where she has lived since she came of age and was let out of foster care.

E: K.C. and her two-year old daughter wait in Sloan’s Lake Park for her husband to return from a job-hunting trip

The issue of homelessness in Denver and indeed metropolises throughout the U.S. has increased greatly since this article was published.

Today, there more than 30,ooo homeless people in Denver according to a report by the Metro Denver Homeless Initiative.

The increased cost of housing in Denver since then has only worsened the problem for people on tight incomes such as Katie Tate, reports channel 7.

In Sloan’s Lake a plan for a development that would be 60% median income housing with a few units reserved for former homeless families was approved by city council in 2019. Five percent of the units are reserved for those at 40% of the American median income.

Since that time, I witnessed the increased cost of housing price out a friend, who when we met 20 years ago had a good job in a tech company and lived in a rented one bedroom apartment. A couple of years ago he was featured as one of the residents of Denver’s Beloved Tiny Home Village. The small project — there are eleven tiny homes — is the first tiny home development aimed to address Denver’s homelessness problem.

In a $55, 596 study by the University of Denver’s Graduate School of Social Work, 61% of respondents in the Denver metro area surveyed cited the cause of their homelessness as ‘unable to pay rent.’