You are here: Home / Uncategorized / Goddess of Prose: Arundhati Roy 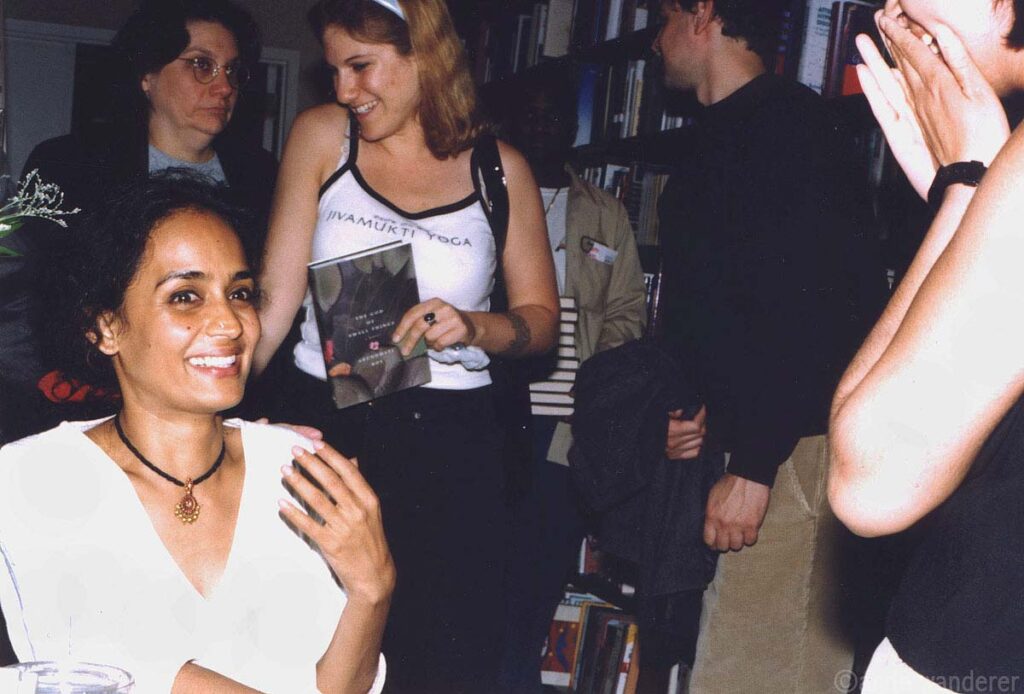 In a few hours Arundhati Roy will read from her New York Times
bestseller and winner of the 1997 Booker Prize for Literature, “The
God of Small Things,” at one of Greenwich Village’s biggest chain
bookstores. But for the moment, she is holed up in a midtown hotel
room trying to regain a bit of composure after a whirlwind day.

The scent of flowers send by admirers is assaulting as I step through
her door into the beige suite. Bags from the Gap are scattered about
on the floor. Roy is decidedly subdued — she apologizes. Her throat
is sore, she explains as she roots around for cough drops. Her book
tour has already taken her all over India, Europe, and now North
America.

Roy was taken by surprise by the phenomenal response her novel. “When
I finished it I had no perspective. I had no idea — I didn’t even
think anyone would publish it,” she says.

“I was expecting rejection slips. I didn’t even know how to go about it — whether you need an
agent or how you should deal with it.”

Within a week of receiving her book, agent David Godwin was compelled to fly to India and land on her
doorstep. Within six weeks, the book was on its fifth printing, and
it had been published in twenty-one different languages, some commonly
considered obscure, such as Estonian and Catalan.

By this point, Roy has developed the novelist’s justifiable suspicion
that her own life has become an open book. Journalists ask her probing
questions and readers inevitably interpret works of fiction with
utterly human themes as based in fact.

“Everyone wants to write about
my dog and my skin and my mother. I mean you private life gets dragged
into much more than needed I think.”

Part of the fascination with India’s newest hit bohemian writer and
former beauty queen lies in the fact that she has crashed the usual
barriers established in traditionally rigid Indian society.  But her
own upbringing does shed light on themes brought up in the novel,
which beautifully unfolds through the eyes of twin sisters, Rahel and
Esthappen.

Like the characters in her novel, Roy grew up near her family’s pickle factory in
the village of Kottayam in India’s southern state of Kerala. It was a
time when the Marxists there were shaking up society and laying down
their now solidified political groundwork.

She was raised by her divorced mother who encouraged her to write from early on. The first
sentence she ever wrote turns up in the book. It was in reference to a
teacher who told her she could “see Satan in her eyes.” Roy wrote: “I
hate Ms. Mitten and I think her knickers are torn!”

The book’s dedication gives insight into the special relationship.
“To Mary Roy who love me enough to let me go,” it says.

Later, in New Delhi she lived in a squatters colony and studied at the
Delhi School of architecture, making money on the side by doing
drawings for 4 rupees (less than 10 cents) an hour. She also played a
role in the movie, Massey Sahib.

She completed architecture school and later went to Florence, Italy
on scholarship to study restoration, but she knew she wanted to write
all along.

“Whenever people ask me why I gave up architecture, I say,
what do you think this is? It’s a piece of architecture. I don’t see
it as really different at all. It’s a process of design and creation.”

After school, Roy wrote two screenplays she describes as “absurd,
lunatic films.” “Electric Moon” which was shown at the London film
festival and “Annie” (a title which was shortened from “In Which Annie
Gives it Those Ones”) which won the 1989 National Award for Best
Screenplay.

Despite her success in writing for the screen, Roy ultimately felt
stifled having to relinquish artistic control to the director. In
1992, she went to work on her novel, working from 9 until 3 everyday.
In four and half years she says she ‘birthed’ The God of Small Things.
She took no advance on the book — “I can’t write to order,” she says.
If anything is evident to the reader it’s that the God of Small Things
was a labor of love.

Critics have been unable to resist comparing Roy to another notable
Indian writer, Salman Rushdie. They both rebelliously poke fun at the
world around them (at the end of our interview Roy laughingly
suggested that ‘everyone should smoke dope!’), but her writing style
is decidedly unique. Roy revels in minute descriptions, making the
reader feels they are actually there — but she has no set formula,
and admits she had no outline for her novel when she began.

“I think there are a lot of good writers. Among good writers you
have selfish writers and you have generous writers. Selfish writers
leave you with the memory of their own feelings. Generous writers
leave you with the memory of the world they have evoked, but I don’t
think that is a function of using language in only one way… Every
writer has their own distinct way to deal with their stories and their
characters,” she says, “Language is like a skin on my thoughts and I
write the way I think.”

What do the folks back in Kottayam India think of the book? “On the
one hand there’s a great deal of happiness that this little village
could actually be the subject of literature and there are things about
it that make people uncomfortable. There are little bits of anxiety
over the caste thing — they feel that it can’t happen, that this is
totally ludicrous. But the thing is that I don’t think anyone
questions the fact that the criticism springs from an affection for
the place.”

So what beautiful trouble will Arundhati Roy be kicking up next?

“I don’t even know what I’ll be doing one year from now! I don’t look
into the future. I just live in the moment.”

I did take other photos but this is the only one I was unable to exhume. I wanted to take photos of Roy on the street but the interview was more important and we were short on time, so I just took some shots in the hotel room and I got this one later at the bookstore.

Roy was the ‘it’ woman in the literary world at that moment and had a lot of interviews lined up as well as the live reading in the evening. I do find it slightly amusing, considering her anti-capitalistic activism since, that I noted there were shopping bags from chain stores all over the room.