You are here: Home / News & Features / ‘Haunted’ Denver: Ghost Stories of the Northside

Denver has a sordid wild west past that still haunts the historic Colorado capital today.
Find out some of the spooky stories from Northwest Denver as told by paranormal experts, a local historian and residents with homes haunted by ghosts. 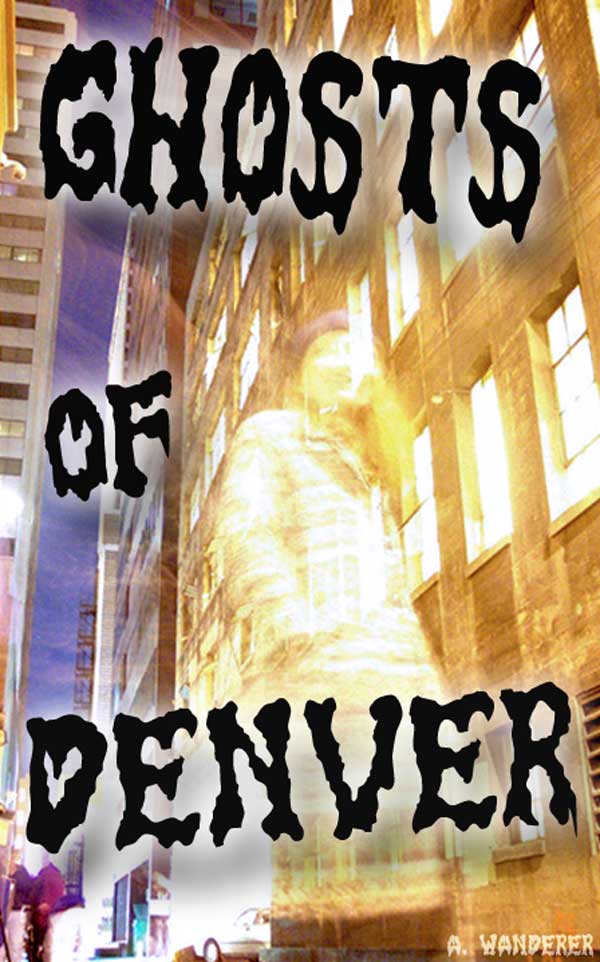 How can you explain the smell of tobacco in a smoke-free house, lights and appliances that turn on and off by themselves and drafts of cold air far from the windows? For believers, the answer is easy — ghosts, of course.

While many relegate unexplainable events to the imagination, there are plenty of perfectly sane people who believe that the dead can come back to haunt us.

With its rich history, North Denver has plenty of ghost stories, both told and untold.

The 1890 mansion, the Lumber Baron Inn at 37th and Bryant is among Denver’s most famously haunted buildings.

One time, Keller says, the mother of a bride arrived early to make preparations for the wedding in the building’s ballroom. She claims she saw a woman in a flapper dress, drinking champagne in the sitting area of the ballroom. The mother of the bride went to introduce herself to the woman, but when she entered the sitting room, she felt a cold blast of air and the woman vanished.

“She literally, I got to tell you, came screaming down the stairs,” says Keller. “She was pretty freaked out. I tried to calm her down the rest of the evening.”

Sometimes the bumps and creaks in the house make Keller wonder himself.

“Sometime at night, when I’m in here waiting for a late check in or something, I don’t know what it is, but you can hear the steps creek literally from top to bottom. I don’t know if its just a chain reaction, you know one contracts and the other expands. It’s like dominoes or something. But people have said, and I sometimes think, ‘God, is that someone walking up and down the steps?’ I’m telling you, it’s a weird sensation.”

A number of times, innkeepers and guests have also remarked that they smelled pipe smoke in certain areas of the mansion, even though it’s a smoke-free building. “I wouldn’t believe it if it was a one-time thing,” says Keller, “But a number of people have had it happen to them.”

Serving as a ghost counselor to spooked guests at his inn became part of the job for Keller, but his oddest experience in the building seems mundane compared to some of the stories. One night, he was up very late laying tile in one of the bathrooms. He didn’t see or hear anything unusual like so many of his guests — he just felt it. There was someone watching him. He looked over his shoulder several times, to see if anyone was there.

“I sensed that it might have been a previous owner, maybe even the original owner of the house,” he said. “It’s a weird thing and that was probably the strongest thing I ever felt in the house.”

Former owners and renters occasionally drop by and tell their own ghost stories about the building as well.

“Even to this day I’m a skeptic,” he says. “All I can tell you is that there have been some experiences. I don’t know what to attribute it to. I would like there to be a reason for it.”

On the anniversary of a senseless drug-induced murder at the mansion, the duo came to the house to do an investigation. Among the tools of the trade are cameras and an electromagnetic field reader, used by trade people to find objects underground and behind walls. Since ghosts are believed to have an electromagnetic composition, the tool is said to be able to track ghosts.

When they arrived, Blakemore and Chandler were met by a crowd of people and two television crews. Blakemore says they were relatively new to paranormal investigations, and were pretty intimidated, but the inn proved to be full of otherworldly visitors. He says they captured on film apparitions such as a non-existent cat in a window and a black woman with a collar, which Beaux believes is a maid that died in the building.

Blakemore says the experience even convinced some of the cynical journalists present that something spooky was going on. Four professional photographers had their normally long-lasting camera batteries inexplicably drained. And right after one of the cameramen sat down to take a break and turned off his camera, he and Chandler, who ran screaming, heard a voice.

Blakemore himself was a non-believer until he met Chandler. He now believes that ghosts retain their personality after death and, just like in the human population, there are only a few really bad seeds. When lights or appliances flicker on and off  and items are moved, he says, the ghosts are actually trying to tell us something. “They’re just as curious about us as we are about them, and I think in the case of an unsolved murder, perhaps they’re trying to solve their own murder.” 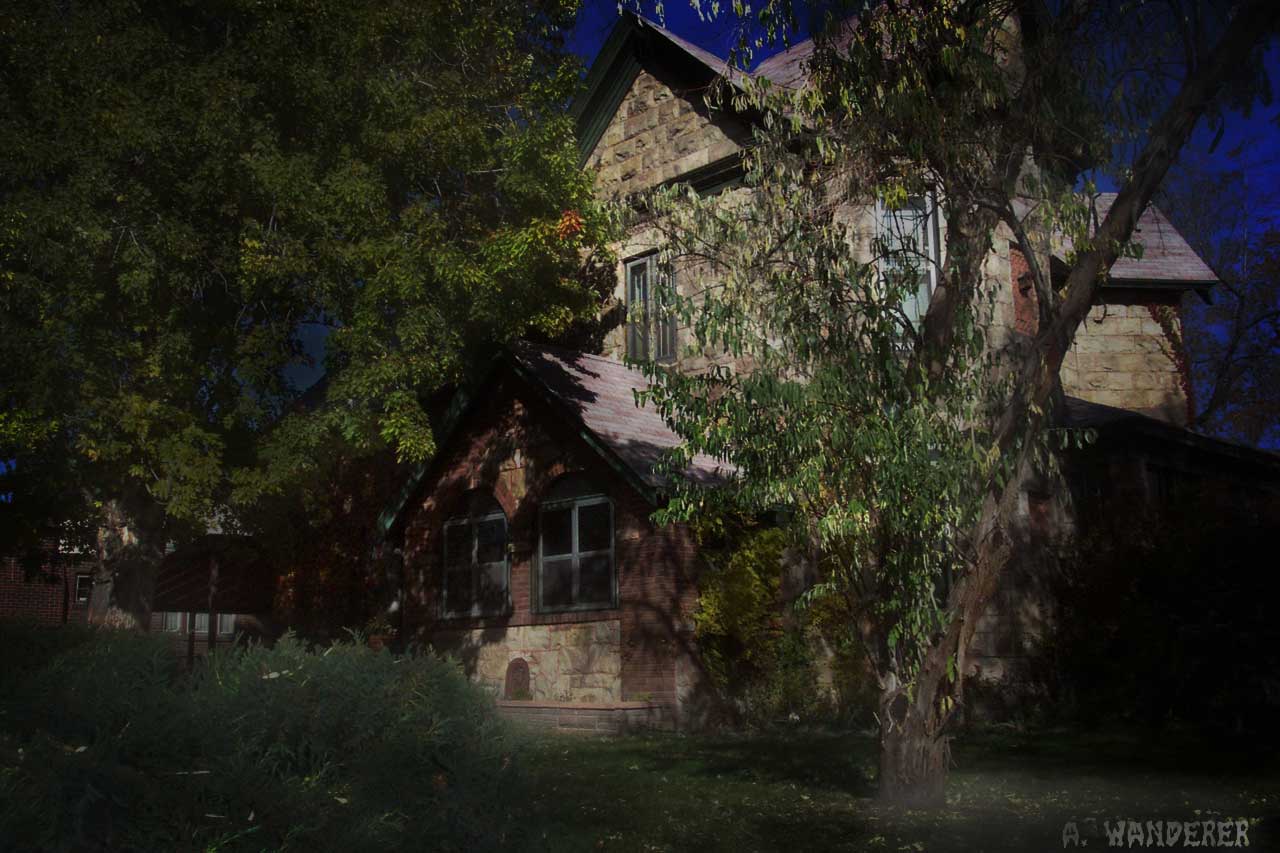 3520 Newton Street in North Denver was once the home of John Brisben Walker, an entrepreneur and dreamer who despite contributing so much to Denver, was cursed in the end. His ambitious ‘Summer White House project’ commonly referred to as the ‘Stone Castle Mansion’ atop Mt. Falcon burned to the ground and he ended up dying destitute.

Next door at 3600 Clay Street, Isobel McGowan told the story of Denver’s ‘spider man,‘ one familiar to many North Denver residents. In the late 1930’s, Theodore Coneys, flat broke and in rags, visited his former mandolin teacher, Phillip Peters, but found no one home. He did find a door unlocked, however. It was fall and it was beginning to get cold, so the young man entered the house, intending to wait for his teacher.

When Peters came home, Coneys suddenly felt ashamed and ran to hide in the attic crawl space. He stayed there for several days before sneaking into the kitchen to snack on the household’s leftovers late one night. He continued to hide in the crawl space and raid the kitchen late at night for five weeks until Peter’s, armed with a shotgun, discovered him. He hesitated in shooting the intruder. The 59-year-old Coneys managed to wrestle the gun away and bludgeon the elderly Peters to death.

Peter’s wife was spared, but after discovering her husband murdered in the kitchen, she felt the home was haunted. She soon moved out of the house and went to stay with relatives. Ten months passed before neighbors reported seeing someone in the house. Police staked out the house and found the severely emaciated killer locked inside. Though the house was abandoned, Coneys had continued to stay in the cobwebbed-attic, earning him the title, ‘Spider Man.’

Today Theodore Coneys’ story is known nationwide thanks to an entry in The Encyclopedia of American Crime; ‘The Stalker,’ an episode of CSI: Crime Scene Investigation; and a The Simpson’s spinoff, ‘The Ziff Who Came to Dinner.’

Haunting in the Historic Houses of Stonemen’s Row

Magdalena Aguayo shared a more recent ghost story that hasn’t traveled much outside her Stonemen’s Row neighborhood. When she and her husband first toured their future house in 1981, Aguayo says she felt, “This uplifting feeling, and it was a mess in here. The mice had lived here for months. It was leaking. It smelled bad, but I had this wonderful feeling.”

After purchasing the house and working on it all summer, the family moved in. Late at night, Aguayo started hearing knocks in distinctive sets of three.

“We had heard there were a lot of parties here before we moved in, so I figured somebody’s trying to find the party in the middle of the night,” she says. She went to the front door on many occasions, only to find no one there.

“I kept hearing them until I decided, you know, this is a little strange.”

She finally decided to wake up her husband, José one night. As the couple investigated one area of the house they would hear the knock from another area, as if the presence was trying to play tricks on them.

Many weeks after they had moved into the house, Aguayo finally found the source of the knocks.

“I was awakened and there was a figure at my bedroom door which is about six or eight feet away. It was a woman with short dark hair dressed in a white, loose fitting gown or robe or something, and she had these big, heavy ropes wrapped around her, like tied up. Her arms were at her sides, and her eyes were telling me, with telepathy, that she needed to be untied.

“I sat up with a startle, and said, ‘Those are so loose, it looks like you can untie yourself.'” The bed instantly started shaking. The figure of the woman was suddenly right next to her. The ghost was sobbing, leaning against the bed, causing it to shake.

Her husband, a heavy sleeper, did not wake up through all of this, so Aguayo woke him up. When they both turned to look at the figure, she was gone, says Aguayo. Later in the same week, her oldest daughter, about 14 at the time, walked into their bedroom in the middle of the night. She said she saw a woman in white, and she followed her into the bedroom.

That was the last time the ghostly woman was seen, or unexplained knocks were heard.

“I’m of Mexican descent I think the way we say it is she came to , ‘darme despedida’, in other words, to say goodbye, and was, I guess, thankful,” she says. “You’d think I would have been frightened but I wasn’t,” says Aguayo, who feels she gave the spirit permission to leave the house.

Husband, José Aguayo, Founder of the Museo de Las Americas, later did some research on the house. He discovered that it was built in 1890 by a stonemason for his daughter, Mary Wilcoe. She never married and rented out part of the building.

He also discovered that 27th to 29 Avenue, from Zuni to Umatilla streets — including the area where their house sits — used to be a cemetery. There has been speculation is that not all the graves were moved. The couple recalls that when one neighbor was digging a basement, they found a child’s tombstone.

Bernadette Garcia says neighbors were kind enough to wait a year, before telling her that a previous owner died in the house she occupied. But by then, Garcia had experienced enough oddities that she thought something seemed strange about the house. She saw shadowy figures move across the room. She heard music and talking that would disappear when she went to the source of the noise. When she visited Mexico, she consulted a curandero, or shaman, who said there was a presence in her house.

“They said that one day, it will tell me what it wants. Why it’s there. It will tell me one day when it’s ready and when it thinks that I’m ready.”

Garcia isn’t scared to face the day the ghosts will tell her what they want. She’s even a little proud.

Addendum: I had some much fun writing this story, that after I moved to Argentina, I decided to dig into Buenos Aires’ haunted past as well. If you love ghost stories, read about some of Buenos Aires’ famous haunted landmarks.