After a year of First Friday mayhem the Art @ Art bus continues to roll. The silver school bus is a common site on first Friday nights when it hauls costumed art lovers to galleries all over town. 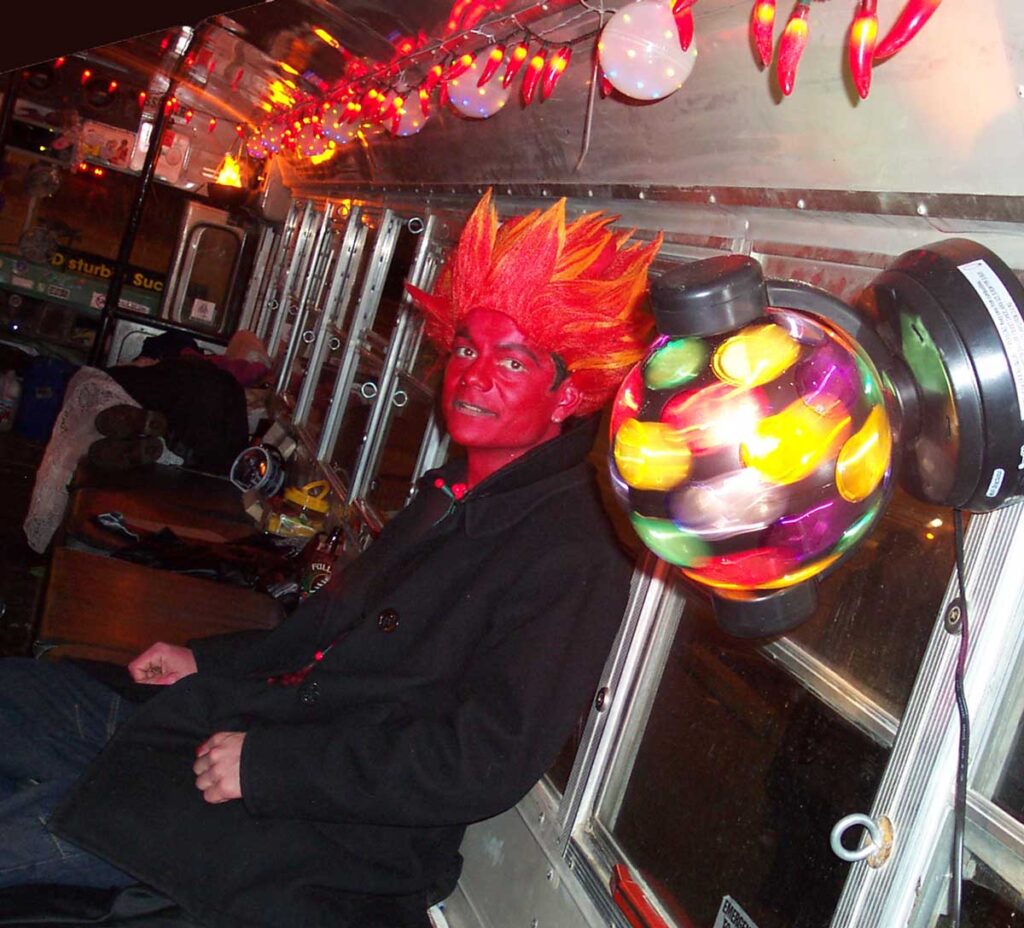 As the playful gang descends upon gallery after gallery, notions of demure art observation go right out the window.

There is one requirement to gain admission to the art bus, which usually begins at North Denver’s Otherside Art Cooperative:

“To be in this gallery you must be art. The idea is either you must be costumed or performing,” says ‘art bus’ creator, Dragon Daud.

Fire throwing, sword swallowing or belly dancing will do.

“We don’t expect people to go buy a costume. But we’re not looking for people looking for a thrill ride,” he says. 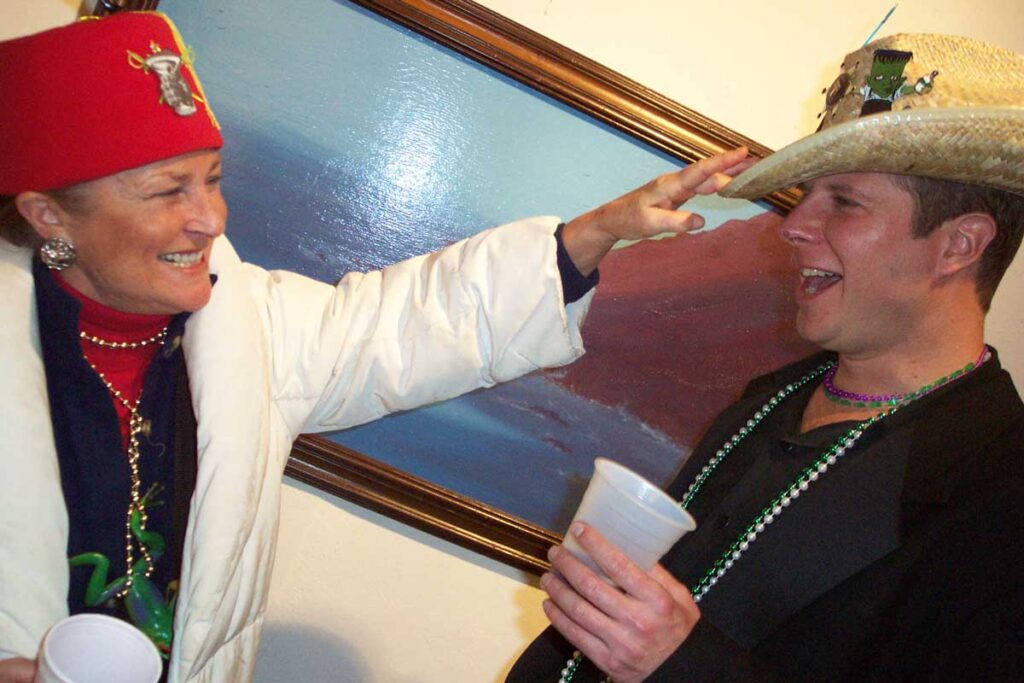 The late artist Adam Adamowicz, known for his conceptual art on video games, with his mother Moira

The one-time Breckenridge ski bus has been gutted and outfitted with a deejay table, found furnishings, colored lights and a rooftop ‘deck’.

Daud, who is the overseer of a non-profit internet service provider, bought the bus in May of 2000 and has been doing [email protected] bus trips on First Friday’s the entire last year.

The bus was christened Cthulhu, after the powerful octopus-like beast invented by H.P. Lovecraft. Riders and gallery staff say it has lived up to its name. 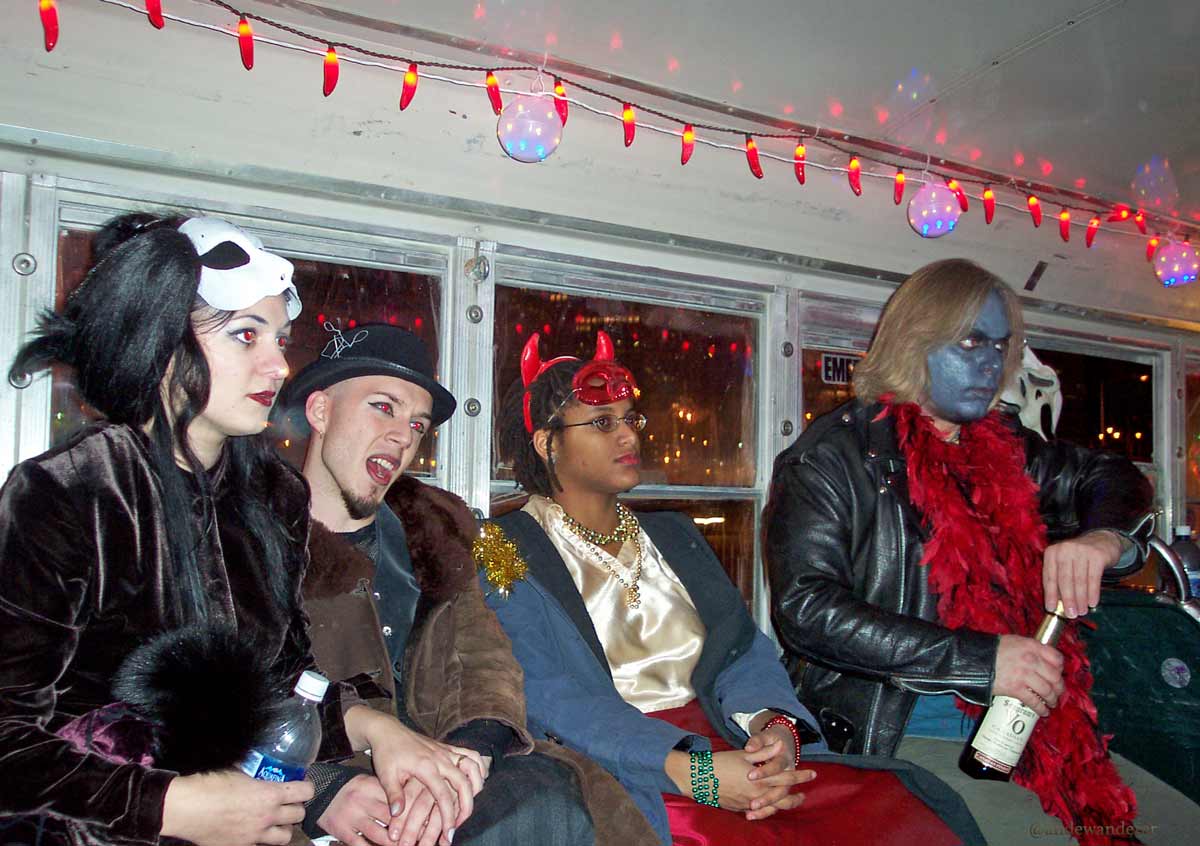 “Anywhere that the bus stops people seem to like it. I mean it’s always pretty hilarious, especially the galleries. They’re usually so stodgy, and at the fancier ones, people are standing around acting sort of proper and formal. And then here come all these freaks running in in costume. They’re always kind of intrigued,” says Adam Adamowicz, a regular participant who took his mom on the bus when she was visiting Denver in December. 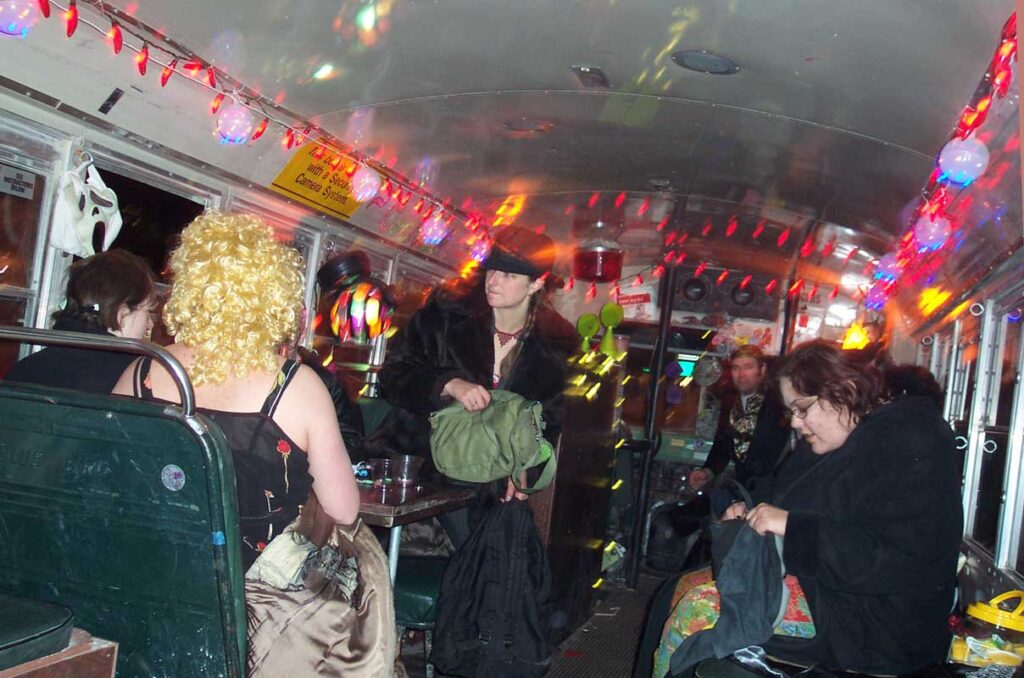 Painted on the side of the bus are the words, ‘Pyrot Express, Disturbia Line,’ a nod to the bus’s grandest undertaking — a yearly visit to the Burning Man Festival, a gathering of the tribes in Black Rock City, Nevada.

Fusing functionality and art, the bus is decked out to look like a pirate ship for the sprawling festival. A photo of the bus appeared in National Geographic for an August 2001 article about public land usage related to Burning Man. (I can’t find the photo but this is the issue on Amazon)

The rest of the year, the bus is used to shuffle boisterous groups around Denver, most regularly on the first Friday of the month art walks. 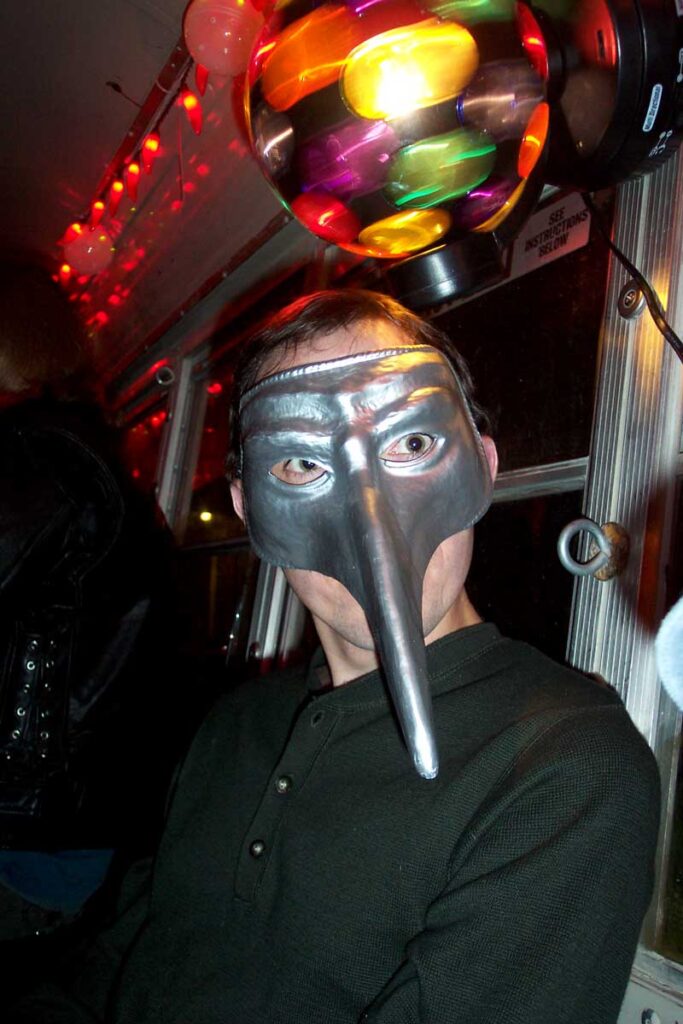 In fairer weather, some climb on the roof of the bus for a somewhat treacherous ride dodging tree branches and highway underpasses.

At stops, fire dancers and musicians may perform on the bus’ roof.

“My first trip was this last Friday,” says Richard Chambers, a poet and new member of the Otherside Art Co-operative.

“I had a real good time. I could have done without stopping at bars, but that’s my preference.”

Late night art bus riders should come prepared for whatever is on the agenda after the galleries close. The main objective is to go to businesses where there is no cover charge Daud says, so that struggling artists on board can afford the festivities.

Art bus rider, Lee dressed as a vixen for a ride on the art bus, Cthulhu

At first Daud and [email protected] co-organizer, Todd Oliver, only stopped at alternative galleries who invited them.

As the year wore on, they have branched out to more mainstream establishments.

“Obviously all the galleries love it when we come except some of them in Cherry Creek,” says Daud.

“They never showed much of an appreciation for us.”

The last time the group tried to visit the upscale neighborhood they were stopped immediately on the periphery of the Cherry Creek Arts Festival.

“They wouldn’t let us in because we were ‘unsanctioned art,” says Daud wryly.

“We were dressed inappropriately for attending a family function.” 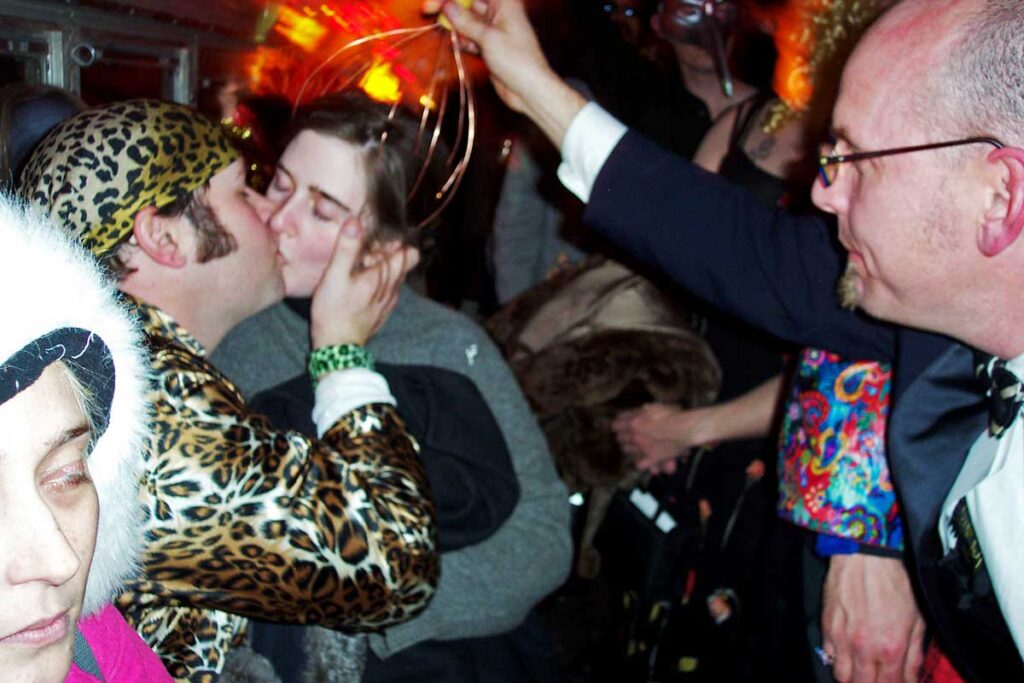 In North Denver, the Navajo Street galleries and the Tennyson Art Walk have become regular stops in addition the Otherside Arts Cooperative.

Most gallery staff appreciate the merrymaking Art @ Art crowd dropping in, although some galleries admittedly stash the booze and breakables.

The Art @ Art bus will continue their year-long adventure this Friday night.

This Friday February 7, the Art Bus will celebrate its first anniversary. The Art @ Art Bus Experience begins at 5p.m. at Other Side Arts, 1644 Platte Street. Costume or performance is required. Suggested $5 donation. Call 303-561-3000 for more info.

The bus will stop back by the Other Side Gallery between 7 and 8 p.m. and set off to visit more galleries.

#1: Filmmaker, Boris checks in with himself via cell phone.

#2: Filmmaker, Boris checks in with himself via cell phone.

#3: The Art @ Art bus takes participants on an unexpected ride.

#4: The Art @ Art bus takes participants on an unexpected ride.

#12: Masked crusaders take a cell phone break outside a gallery on Friday, January 10.

#23: Writer, John frees camps it up for the camera with his blond hairdo.

#24: Architect, Tom Doerr shows nothing is sacred on the art bus, harassing a couple sharing an intimate moment.

#26: Some choose to stay on the bus at the occasional bar stops

#34: John takes care of lighting on the back of the bus

#48: Amanda and Boris hold on tight for a bumpy ride through downtown Denver