Bhangra and other South Asian sounds made their way into the U.S. dance club scene in the late 90s. Basement Bhangra in New York City’s West Village was ground zero for one weekly party that ran for twenty years.

Go into any New York branch of a chain music store in New York and you will find a relatively sparse selection of music from South Asia, especially considering the vast array that exists.

Sam Goody, one of New York’s most prominent music stores, does have an “Indian” section of music, a catch-all category which includes anything from the sub-continent. A manager of the Sam Goody’s World Trade Center location says their South-Asian selection “is not extensive.”

Tower Records stocks classical Indian music CD’s in their world music section, but more pop-oriented South Asian musicians are put in the pop music section of the store because they have found they sell better there, explains Gloria Rivera, the World Music Purchaser for the Tower location on Layafette Street.

HMV has about two hundred South Asian CD’s in their “Indian Music” section, most of which are compilations and many of which are traditional Pakistani music.

Devin Chandrika, a manager at the store says the stock of South Asian CD’s fluctuates widely according to market trends. He said most of the people buying Indian classical music are European tourists thrilled to find the CD’s for cheaper than at home.

South Asian customers, he points out, tend not to buy traditional music at HMV — they come in searching for mainstream pop music. 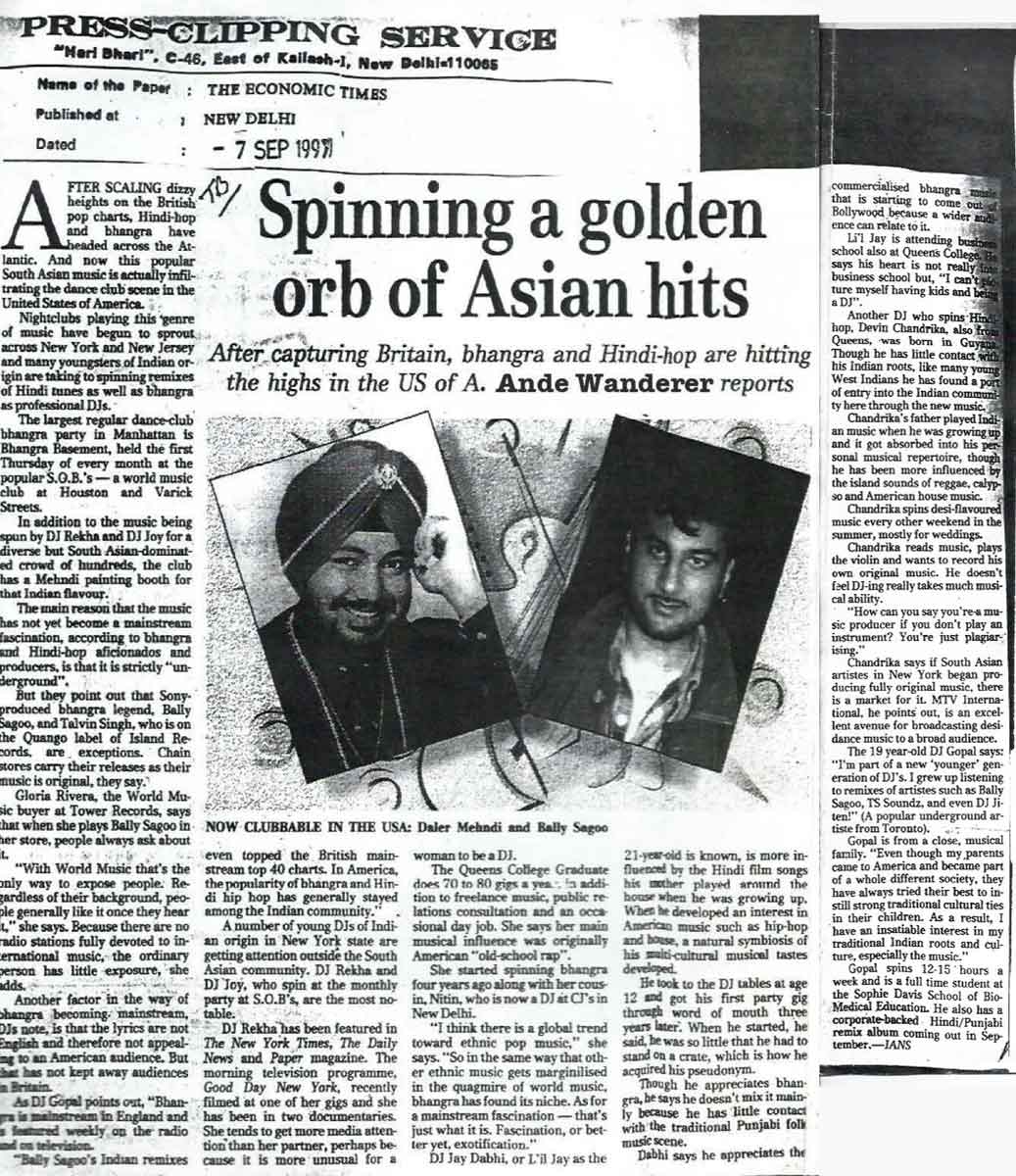 All of these stores are forced to ignore the underground development of a large and increasingly influential South Asian addition to the music scene in New York — Hindi-Hip Hop, Hindi film songs re-mixed with western dance music like House, Reggae, Ragga, and Jungle.

Kang Fu, a recent release from Bhangra musician, Avtar Singh Kang, who is known as the “big daddy of Bhangra”, has sold well in North America. In an interview on The Bhangra Dimension website, he reflects how Bhangra has changed in recent years.

Lut ke Lagee, the songs were lyrically structured and very deep in lyrical content. Nowadays, the lyrics are more in balance with the music.

“The formula has changed because I believe the kids who listen to the music these days do not understand the words being spoken as much. We also didn’t have modern instruments in those days, it was basic and traditional tools like the tabla, dhol and baja not things like the keyboards, DAT tapes and synthesizers.”

Now, due in part to the added technology,  Hindi-Hop and Bhangra are infiltrating the tri-state area dance club scene. The largest regular dance-club Bhangra party in Manhattan is Bhangra Basement, held the first Thursday of every month at the popular S.O.B.’s, a world music club at Houston and Varick Streets.

In addition to the music being spun by DJ Rekha Malhotra and DJ Joy for a diverse but South-Asian dominated crowd of hundreds, the club has a Mehndi painting booth and colorful images projected on to a screen of the stage.

Admission is twelve dollars and the party doesn’t really get started until after 11p.m.

The main reason that the music has not yet become a mainstream fascination, according to Bhangra and Hindi-Hop aficionados and producers, is that it is strictly “underground.”

New York DJ Gopal says, “All the remixes that are made by Indian DJ’s and producers are only sold in Indo-Pak grocery-music stores.”

This is because re-recording Hindi film tunes and Bhangra tracks in any capacity without permission from the original artist is illegal. The chain music stores would probably have major lawsuits brought against them, by the original artists whose tracks are used, when they sold any DJ remixes.

The bulk of the Bhangra and Hindi-Hop produced in North America is not fully original. Some exceptions are Sony-produced Bhangra legend, Bally Sagoo, and Talvin Singh, who is on the Quango label of Island Records. Most chain stores carry their releases, since their music is original.

Another factor DJ’s note is that the songs are not in English, and therefore not as appealing to  American audience. But that has not kept away audiences in the UK.

As DJ Gopal points out, “Bhangra is mainstream in England and is featured weekly on the radio and on television. Bally Sagoo’s Indian remixes even topped the British mainstream top 40 charts.  In America, the popularity of Bhangra and Hindi Hip Hop has generally stayed among the Indian community.“

But a number of notable young DJ’s from the New York area are getting attention outside of the South Asian community. DJ Rekha and DJ Joy, who DJ the monthly party at S.O.B’s, also do a smaller weekly party at @Cafe on St. Marks Place between Second and Third Avenues.

DJ Rekha has been featured in the New York Times, the Daily News and Paper magazine. The morning television program, Good Day New York, recently filmed at one of her gigs and she has appeared in two documentaries.

DJ Rekha tends to get more media attention than her partner, perhaps because it is more unusual for a woman to be a DJ.  The Queens College Graduate does 70-80 DJ gigs a year, in addition to freelance music, public relations consultation and an occasional day job.

She started spinning Bhangra four years ago along with her cousin, Nitin, who is now a DJ at a club in New Delhi called CJ’s. Currently, she is working on trying to produce some tracks for the public. “I think there is a global trend toward ethnic pop music. So in the same way that other ethnic music gets marginalized in the quagmire of world music, Bhangra has found its niche. As for a mainstream fascination ‑ that’s just what it is. Fascination, or better yet exotification.”

Another young DJ, Jay Dabhi, or L’il Jay, as the 21 year-old is known, was more influenced by Hindi film songs that his mother played around the house when he was growing up. When he developed an interest in American music such as Hip-Hop and House, a natural symbiosis of his multi-cultural musical tastes developed.

He first took to the DJ tables at age 12, and got his first party gig through word of mouth three years later. When he started, he said, he was so little that he had to stand on a crate, which is how he acquired his pseudonym. He says that though he appreciates it, he doesn’t mix Bhangra mainly because he has little contact with the traditional Punjabi Folk Music scene. He appreciates the commercialized Bhangra music that is starting to come out of Bollywood because he says a wider audience can relate to it.

Dabhi has a regular Friday night gig at Tropicana in Jersey City, where he spins mostly American music. He also spins Hip-Hop and Reggae at The Edge in New Jersey, in addition to doing private Hindi-hop parties. His standard fee for a night’s work in New York is $500 and more for gigs outside the city.

Dabhi is attending business school, also at Queens College. He says his heart is not really into business school but, “I can’t picture myself having kids and being a DJ.”

Dabhi has two CD’s out: New York’s Finest Part I and Part II. Part II, the most recently released CD, is only available in South Asian-owned stores, but it sold 10,000 copies in the first two weeks. Still, Dabhi says bootlegged copies of his music are all over the world; though it has been legally distributed only in North America. To his frustration, a friend brought back a bootlegged copy of his CD from in India that said it was produced in Bombay — even though Dabhi hasn’t been to the sub-continent since he was two years-old. He has also come across illegal copies of his CD from Australia and South Africa as well as in other parts of the US.

“You can’t do anything,” says Dabhi, ” it’s illegal to use the Bollywood songs in the first place. But were making it better for them (the original artists). We make their songs more appealing to the crowd here. There are so many kids here who would never have heard of this stuff if it wasn’t for our music.”

Another DJ who spins Hindi-Hop, Devin Chandrika, also from Queens, was born in Guyana.  Though he has little contact with his Indian roots, like many young West Indians he has found a port of entry into the Indian community here through the new music.

His father played Indian music when he was growing up, and it naturally got absorbed into his personal musical repertoire, though he has been more influenced by the island sounds of Reggae, Soca, Calypso and American House music.

Chandrika spins desi-flavored music at least every other weekend in the summertime, mostly for weddings. Since May, he also been a regular weekend DJ at Caribbean Tropics in Jamaica, Queens. For private parties, he charges $400 dollars for six hours of non-stop music and $100 per hour thereafter. For a day’s work on the weekend he earns more than a week’s work at his full-time job as manager at HMV music store.

Chandrika reads music and plays violin and desires to record his own original music. He doesn’t feel DJ-ing really takes much musical ability; ” How can you say you’re a music producer if you don’t play an instrument? You’re just plagiarizing.”

The 19 year-old DJ Gopal says “I’m part of a new “younger” generation of DJ’s. I grew up listening to remixes of artists such as Bally Sagoo, TS Soundz, and even DJ Jiten” (a popular underground artist from Toronto).

Gopal is from a close, musical family.

“Even though my parents came to America and became part of a whole different society, they have always tried their best to instill strong traditional cultural ties in their children.  As a result, I have an insatiable interest in my traditional Indian roots and culture, especially the music.”

Gopal spins 12-15 hours a week and is a full time student at the rigorous Sophie Davis School of BioMedical Education, a condensed seven-year MD program at CUNY.

He also has a corporate-backed Hindi/Punjabi remix album coming out in September that was a collaboration with DJ Parwinder and he is also working on a “Chicago-style” remix album . Gopal was also featured on Vision of Asia, a weekly program nationally broadcasted throughout India.

Chandrika says that if South Asian artists in New York began producing fully original music there is a market for it. He says MTV International is an excellent avenue for broadcasting Desi-Dance music to a broader audience.

Gloria Rivera, the World Music Buyer at Tower Records says when she plays Bally Sagoo in the store people always ask about it.

“With world music that’s the only way to expose people. Regardless of their background people generally like it once they hear it.” Because there are no radio stations fully devoted to international music, the general public has little exposure, she says.

Future MD, DJ Gopal says he doesn’t plan to let go of his love of music despite his medical aspirations. And though most of his Hindi-hop audiences are of South Asian descent he laments, “In the future I would like to see this change and hopefully American society will become more accepting of Indian culture and it’s music.”

In 2017 she stopped hosting Basement Bhangra after 20 years.

Bhangra had only just started to make its way via Britain into mainstream pop music in the U.S. before 2000. The cheerful music happens to mash up well with drum and bass, dubstep and hip hop.  Panjabi MC‘s 1997 song Mundian To Bach Ke’ (‘Beware of the Boys’) was the most popular Bhangra song when this article was written. In 2003 a re-release of the song featured, Jay Z.

But it was 2001’s ‘Get Your Freak On’  by Missy Elliot’ that first introduced bhangra beats to radio listeners across North America.